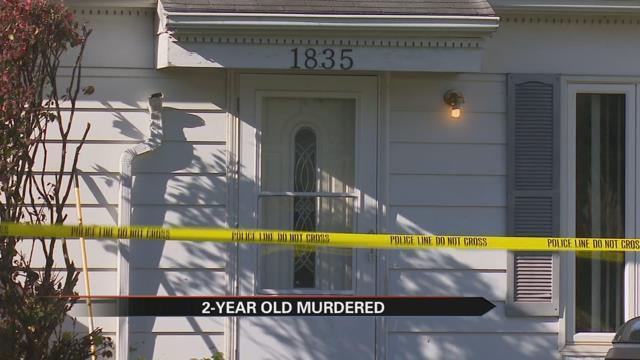 A Warsaw man has been preliminarily charged with one count of murder in the death of his girlfriend's 2-year-old girl, according to the Kosciusko County Sheriff's Office.

"We saw her over there playing since she was born," neighbor Cindy Brauneker said.

Neighbors along a normally quiet Sue Street in Warsaw were in shock Friday morning.

A 2-year-old girl they often saw playing in the front yard of a home on their block was found dead in the backyard Friday morning.

The Kosciusko County Sheriff's Department said an investigation into a potential lost child or custody complaint Thursday night escalated after 29-year-old Christopher Grimmett first lied to police about the whereabouts of his girlfriend's toddler, but then directed them to his brother's house on Sue Street.

"At that point in time, officers discovered evidence inside the residence that actually led them outside, and at that point, they located the 2-year-old's body in the shallow grave in the backyard," Kosciusko County Sgt. Chad Hill said.

The body of 2-year-old Adalin Stamper was found in a shallow grave in a fenced-off backyard.

Around 5 p.m. Friday, the Kosciusko County Coroner released her cause of death, concluding, "Adalin had died from multiple blunt force traumatic injuries."

Grimmett was preliminarily charged with her murder Friday morning; adding to a criminal record that already includes two felonies and three misdemeanors over the last decade.

The sheriff's department said he has admitted to the crime.

Neighbors were shaken by the news Friday afternoon.

Many said they do not know the homeowners well, but they do know Grimmett often visited his brother and sister-in-law with his girlfriend's daughter.

The crime scene was active until 12:30 Friday afternoon, as authorities pieced together what led to the unthinkable.

"I don't understand how anybody could harm a little kid like that, you know?" Brauneker said.

The sheriff's department said Grimmett was babysitting for his girlfriend while she was at work.

He is now in custody, without bond.

Though he has admitted to the crime, the sheriff's department said Grimmett has not revealed why he did it.

"It's very tragic," Hill said. "I mean, this is a horribly tragic situation. Most -- all -- of the officers at least in our department have children, so it deeply affects a lot of the officers that have to work this type of gruesome discovery."