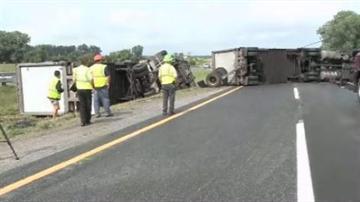 SOUTH BEND, Ind. -- A UPS truck rolled over on the Indiana Toll Road near the South Bend airport Friday and snarled traffic for several hours.

The accident caused significant delays for drivers like Nick Hromis, who was headed out of town for the weekend.

Hromis and his wife had a much closer view of the accident than they ever wanted.

"That was the first time I have been this close to a big accident, I mean, I could have been involved very easily," said Hromis.

Hromis says he was about to pass the ups freight hauler when its three trailers began to fishtail.

"It was very hard raining at that time and we were doing about 60 I would say," said Hromis.

Hromis pulled over as the trailer rolled.

"It was very scary," said Hromis.

No one was hurt, but the traffic backup lasted for several hours as workers moved packages from one truck to another.

State Police say they will likely ticket the driver of the truck for driving too fast for conditions.

The driver wasn't seriously injured in the accident.