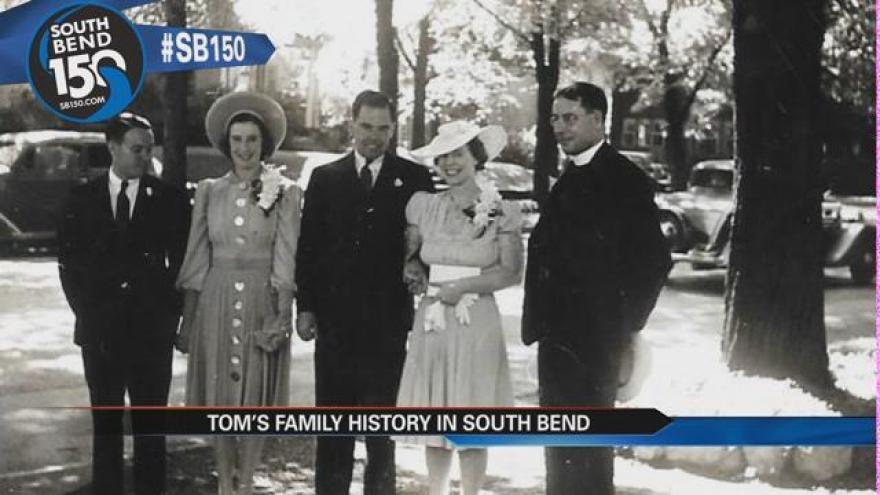 SOUTH BEND, Ind. - My South Bend roots start over 100 years ago with my grandparents. My grandfather Edward Coomes was born in Louisville, went to Cathedral High School in Indianapolis, and came to South Bend to attend the University of Notre Dame in 1927.

My grandmother's roots are not as well known.

"From what I understand, from taking to her adopted sister Aunt Ethel, they went to the orphanage your grandmother, my mother was in Marion Indiana and at that time she was probably five or six from what I can remember, and they just went to the orphanage and picked her out and took her home with them. At that time you didn't have to go through legal channels or anything, they just wanted to get kids into homes. Her sister Ethel married, so they moved to their house on Notre Dame Avenue,” said Marty Gill, Tom's Aunt.

"There were three girls living in aunt Ethel's house, she kind of ran a little boarding house." Gill says. "I know one of the other girls in the house, Betty, met another student at Notre Dame. I think she might have met your grandfather through Betty, but there was a Notre Dame connection there."

Ed and Marie were married August 7, 1940 at St. Joseph Parish in downtown South Bend. The original church was demolished and the newer building was built in 1965.

My grandfather's career was in academia. He had a bachelor's degree in electrical engineering, master's degree in math from Notre Dame and a PhD. in physics from MIT.

The honeymoon years in South Bend were short. In 1941 the U.S. entered WWII and by 1942 Ed, Marie and their first daughter Jane moved to Boston for work at MIT developing radar for the war effort.

At the end of the war the family moved back to South Bend, but moving back wasn't so easy.

"From what I recall, I don't know if there were a lot of houses, or I don't know if they were panicking because they had three kids and they needed to get back so he could start work working at Notre Dame. So they just got the house sight unseen," says Gill.

The family moved into the house on Johnson Street, the family grew by two more children, for a total of 5. All attended Holy Cross School and then St. Joseph High School, the new high school recently moved closer to downtown.

When asked about growing up in South Bend, Gill says, "I can remember my mom and I always catching the bus and going shopping in downtown South Bend. Our biggest thing was to go to Kresge's and have hot dogs and then buy trinkets or whatever."

My grandfather retired in 1974 from Notre Dame after 42 years of teaching and research.

A long resume, that included building the first particle accelerator on campus, the most recent version was installed on campus in 2012.

They are survived by nine grandchildren and eight great grand children.