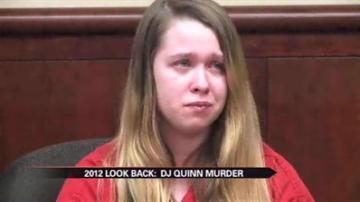 The murder of DJ Quinn filled newscasts throughout 2012. ABC57 takes a look back at how the story of young love turned tragic in January 2012.

This will no doubt be a difficult Christmas for the family of DJ Quinn.

It is the first since the 21-year-old died at the hands of his teenage girlfriend, Destiny Coulson.

It all unfolded inside Quinn's Eau Claire home in January 2012 when a night of drinking escalated into an argument.

17 year old Coulson picked up Quinn's shotgun and just feet away from her boyfriend, pulled the trigger.

At first the teen remained emotionless as she faced a grieving family time and time again in court.

But as the case went on, Coulson's hard shell unraveled.

During sentencing, she openly cried for the first time, reading a letter to Quinn's loved ones.

Coulson sits in a Michigan prison where she will be released in 12 to 16 years.

She has more than a decade to remember and reflect on the decision she made on a cold January night in 2012.

A decision that changed a family's life for now, and every Christmas to come.