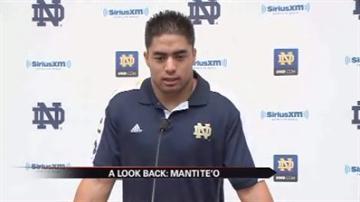 SOUTH BEND, Ind. -- It would be easy to describe Manti Te'o's impact on Notre Dame’s football team through statistics alone. He has 103 tackles, 7 interceptions and an uncanny ability to find the ball, no matter where it seems to fall.

But to explain his presence is much more difficult.

"He's not really about that personal, statistical gain. He just wants to win so if the defense doesn't play well, of course he's upset about that but it's not because he didn't get a pick or tackles,” said Dan Fox.

He shocked fans with his decision to return to Notre Dame for his senior year. One of the first signs this season and this player might be different.

“He's done so much. He's such a great representative of our program. He has unfinished business as it relates to this football team,” said Kelly.

"I've been one to really cherish the moment and one who thinks quite different. I think not just what's right in front of me. I don't have a second chance for senior year,” said Manti.

Never were those personal philosophies put to the test like this season.

"He lost some people very close to him and it has obviously taken its toll on him,” said Kelly.

On September 11, Manti lost his maternal grandmother to a long term illness.

Just hours later, his girlfriend Lennay passed away from leukemia.

The only thing he did miss was his girlfriend's funeral.

“One day she made me promise that, she said, ‘Babe, if anything happens to me, you promise that you'll still stay over there and that you'll play and that you'll honor me through the way you play, and know that I would rather have you there.’ And just make sure that all she wanted was some white roses. White is her favorite color. So she just wanted some white roses and that's all she asked for. So I sent her roses and sent her two picks (interceptions) along with that, so that was good,” said Manti.

On the day of her funeral, the Irish played Michigan under the lights.

Nearly 70,000 fans wore leis in Manti's honor and began a movement that would propel Manti and the Fighting Irish into an undefeated season.

“I can't describe how I was feeling. I felt a sense of peace knowing that so many people cared about Manti instead of No. 5,” said Manti.

Manti continued to garner accolades and unprecedented statistics,  the most impressive of which came after the season when he became the most decorated player in college football history.

The only disappointment was the Heisman-- but even that couldn’t' shake the rock of the Fighting Irish.

The Fighting Irish will play Alabama on January 7 for the BCS National Championship.