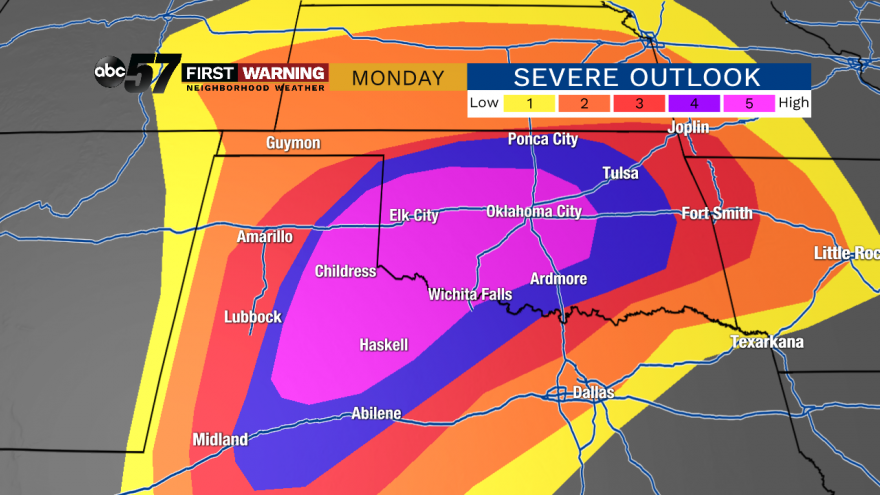 Monday and Monday night will feature one of the most significant severe weather and tornado outbreaks of the last several years across parts of Texas and Oklahoma. 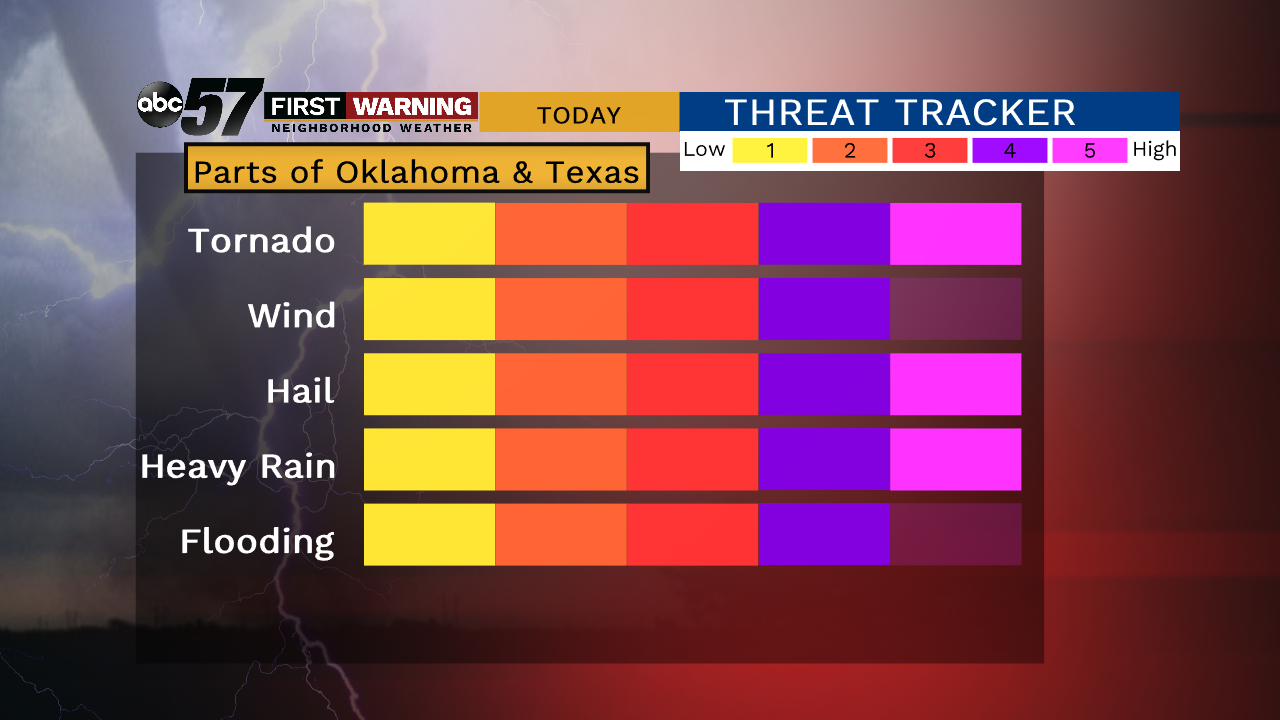 A very rare "High Risk" of severe weather was put in place by the Storm Prediction Center for portions of the Texas Panhandle and Oklahoma. A "High Risk" is as high of a risk category as there is. The threats from today's supercell thunderstorms are:

•Numerous tornadoes, some of which could easily become strong, violent and long-lived 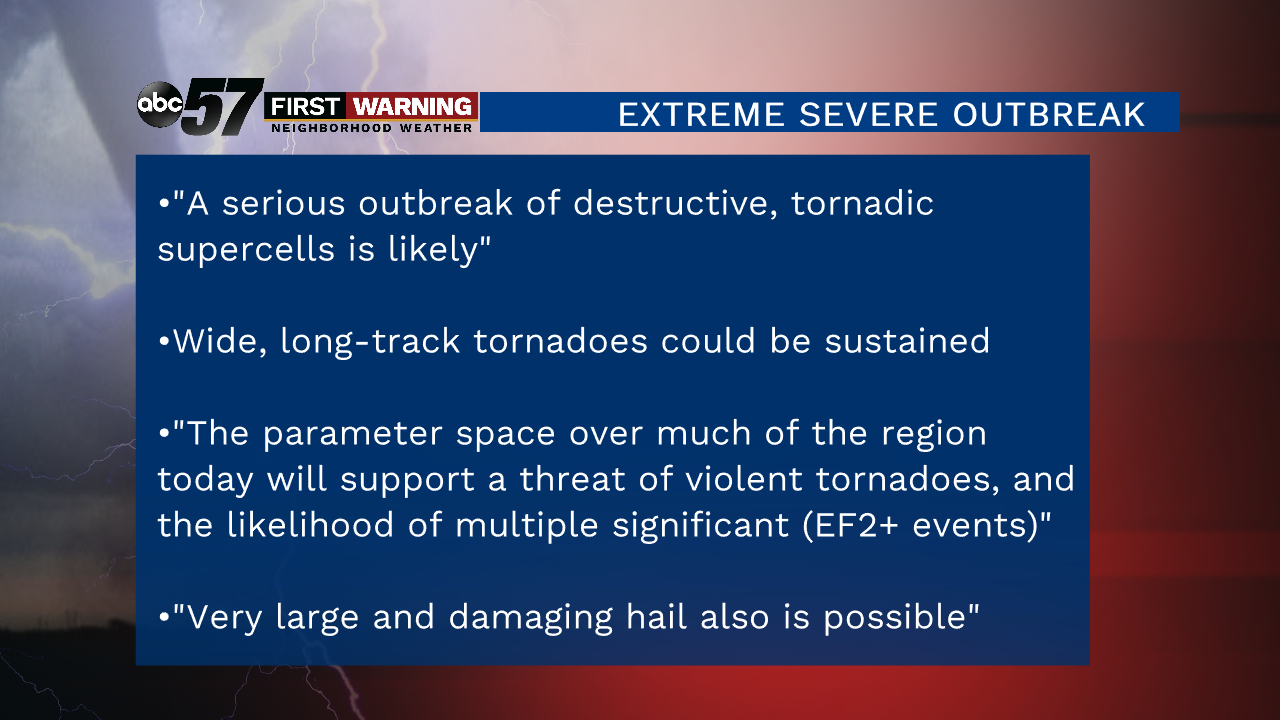 It is one of those setups that meteorologists often refer to as daunting. The ingredients needed for severe weather and tornadoes will come together perfectly. Not only that, but there will be multiple rounds of severe thunderstorms. Some locations could be impacted by severe weather 2 or 3 times. 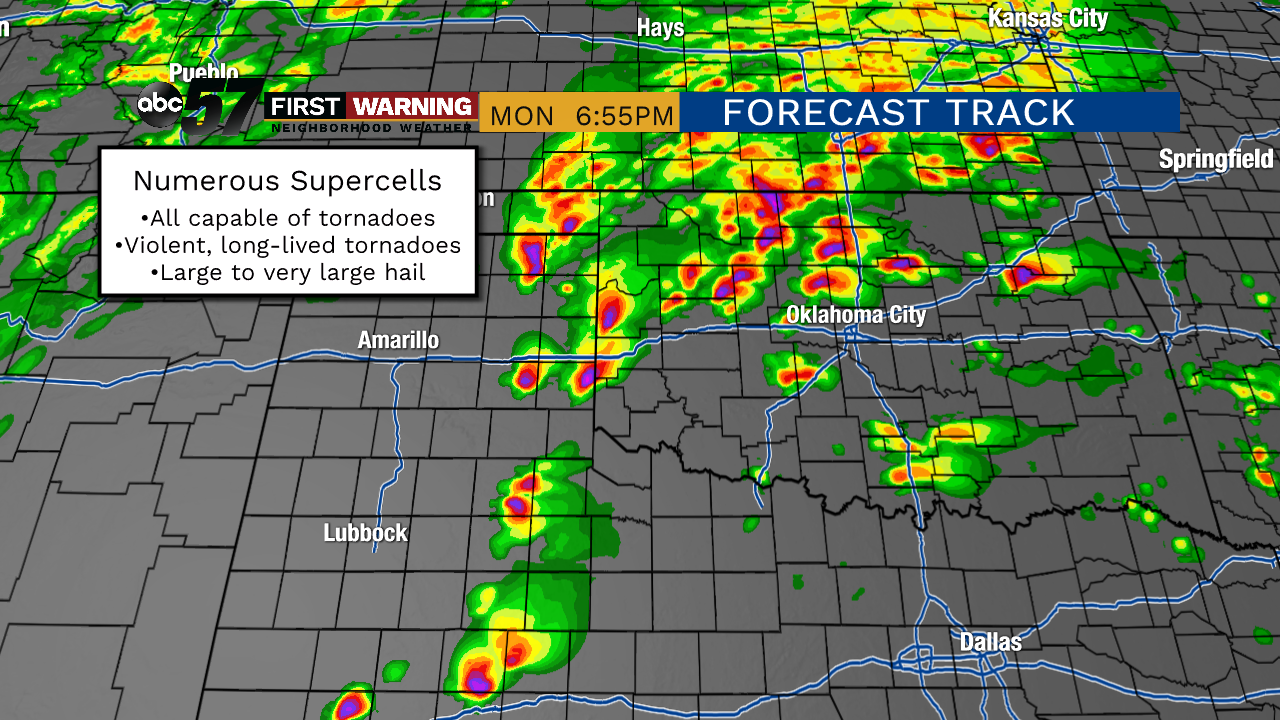 Potential radar Monday evening.
Some of the larger cities that could see severe weather and tornadoes are Oklahoma City, Norman, Moore, Tulsa, Elk City, Enid, and Lawton in Oklahoma, and Amarillo, Lubbock, Childress, and Wichita Falls in Texas. In anticipation of the severe weather outbreak, numerous schools, colleges and universities decided to close Monday. That includes major universities and school districts like the University of Oklahoma, Oklahoma State University, Oklahoma City Public Schools, and others. 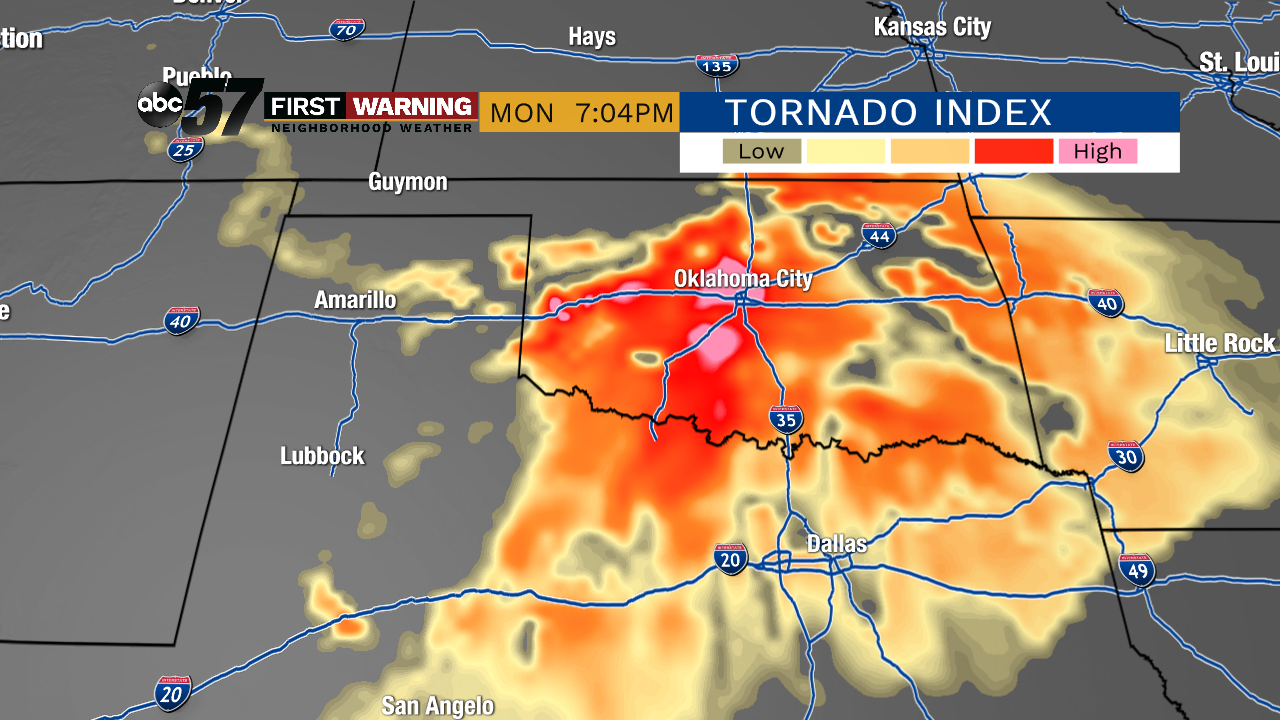 Tornado index Monday evening.
Furthermore, the Oklahoma City Zoo closed early, the City of OKC issued a Liberal Leave Policy for the day, the OKC Art Museum closed for the day, and multiple stores like the OKC Outlets closed early. It's all because the confidence in a significant severe weather outbreak is so high. 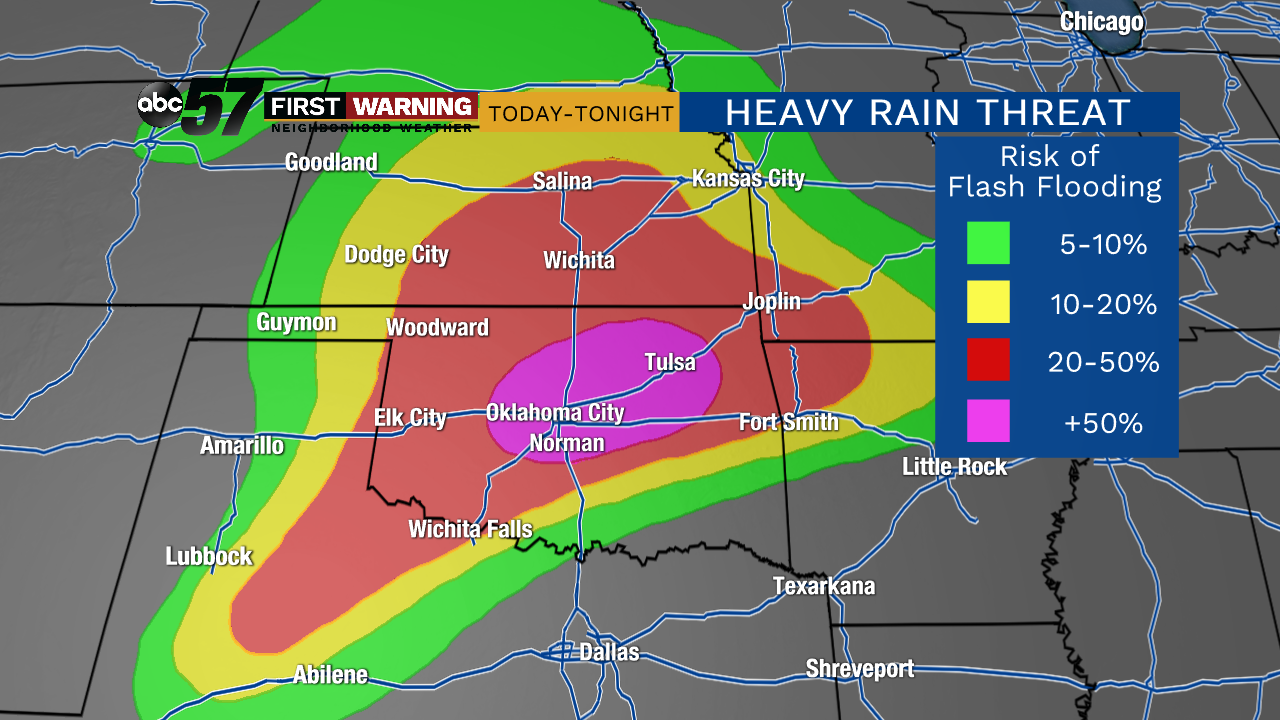 Flash flooding threat Monday and Monday night. WPC
Unfortunately, it's not just severe weather and tornadoes expected to slam parts of Texas and Oklahoma. Flooding and flash flooding are likely in the red and pink shades above. There is a moderate to high risk of flash flooding within 25 miles of a point across parts of Texas, Oklahoma, Kansas, Missouri, and Arkansas due to the multiple waves of heavy rain and thunderstorms expected thru Tuesday morning. It's very, very rare to have such a substantial tornado threat and flash flood threat simultaneously. 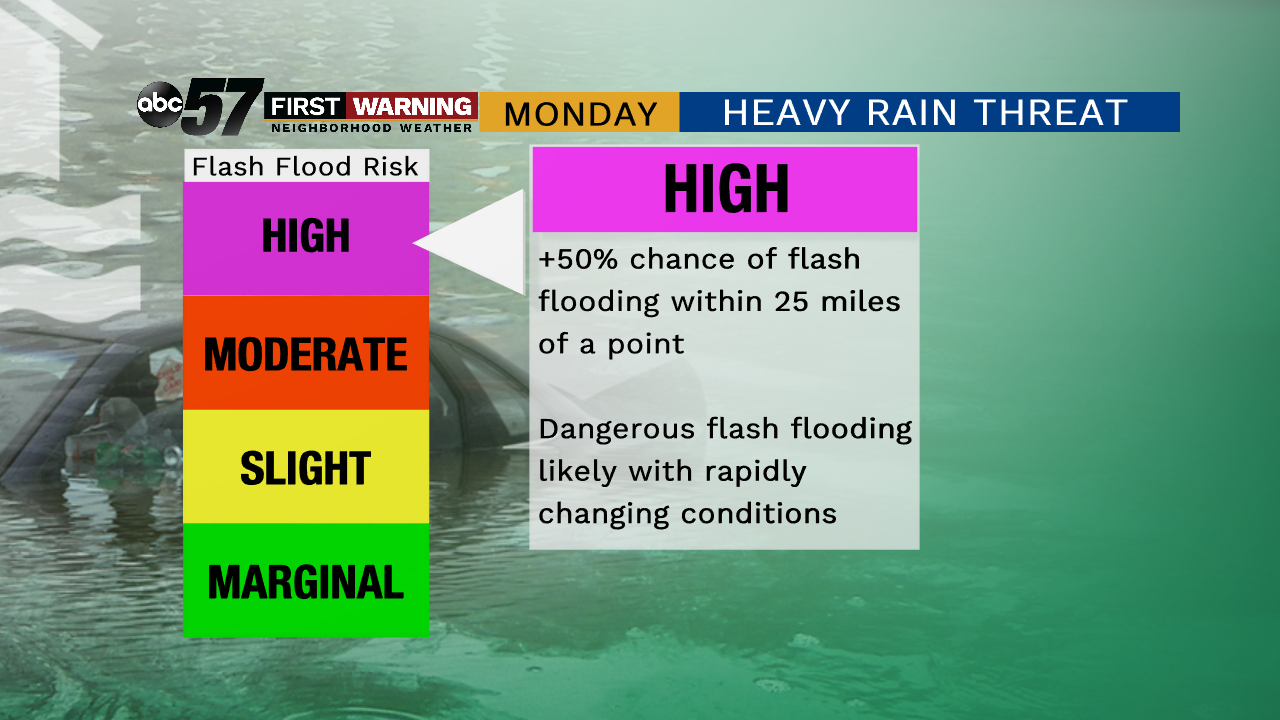 That is true for any location in the United States, not just Oklahoma and Texas. Flooding is the deadliest of natural disasters, and combining the extreme risk of flooding with the high threat of tornadoes will lead to one of the most dangerous weather days in Oklahoma and Texas history.
Share this article: