Tornado sirens go off in Goshen due to strange cloud 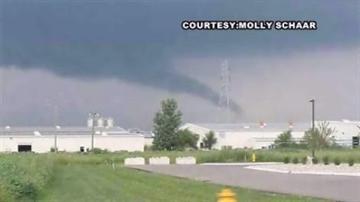 GOSHEN, Ind.-- Reports of funnel clouds in Goshen were just a false alarm. What people perceived to be an oncoming tornado was just a scud cloud.

The sirens encouraged a local hotel to tell residents to take cover over their loud speaker.

Tia Mahoney said, “They told everybody to stay inside and stay calm! And I was like, there’s a tornado!"
Mahoney laughed because that cloud is the dark horse of the meteorology world.

While a scud cloud looks like a funnel cloud, it's not.

Cody Hurd said, “They get people scared for no reason that’s for sure!"

Tyler Moles said, “It didn’t look like a tornado. I mean it looked like a thunderstorm because it was lightning and raining, not a tornado so I don’t understand why they went off.”

Moles said his little brother was frightened when he heard the sirens.

Moles said, “He got frightened. He was scared and shaken up and running around the house.”

Elkhart County dispatch said all it takes is just one report or sighting of a tornado for them to sound the sirens.