Tornado touches down in Oahu 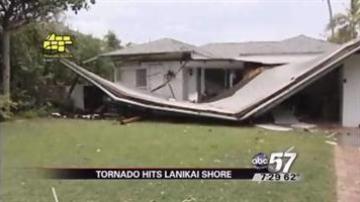 HAWAII- People deal with hurricanes and earthquakes, but this week the islanders got a small taste of a tornado.

The twister started as a waterspout before it moved ashore in Lanikai.

The tornado traveled over a mountain, lifted briefly, then touched down like again.

There was some damage to houses on the shore, but so far no deaths have been reported.