Tough fines ahead for blighted properties in Pokagon Township 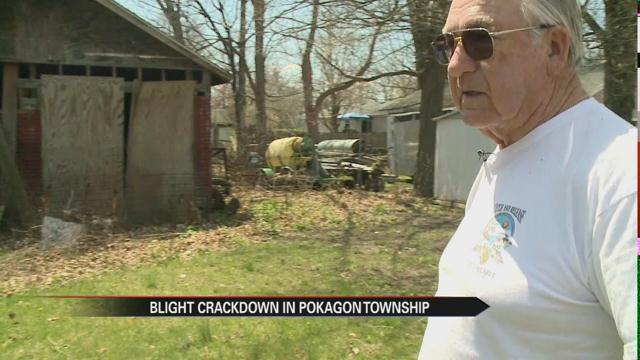 Some folks living in a small Cass County town have been complaining about unkempt yards in their neighborhoods.

And now, the local government is telling violators to clean up or pay up.

One homeowner in Pokagon Township says he hopes fines come sooner than later.

Whenever Carlton Vanorman walks outside his home on the corner of Kansas and Barron Lake Road, he doesn't like the sight he sees across the yard.

And he's now hoping the government will punish folks in the area who neglect their yards.

And he lives next door to rusted gates, broken appliances, old toys and gaping holes.

“I keep this mowed in here so we don't get the rats and whatever coming over here,” Vanorman said.

He says that's because this once occupied lot, was abandoned by its owner.

“That's why I was over here cutting all this stuff down, to make it look a little bit better,” he said.

Pokagon Township told The Leader Publication there would be a tough fine of $75 for blighted property violators.

But Vanorman says he hasn't seen that ordinance enforced, yet.

“I don't know of anyone that's ever said [the abandoned lot's owner] received any kind of a warning or a notice from the government," he said.

And he thinks this untamed yard is more than just an eyesore.

“I'd like to see somebody come out and really take a good look at it and see what a hazard it is.”

Vanorman says the church nearby offered to buy and convert the land into a parking lot 10 years ago but the owner declined.