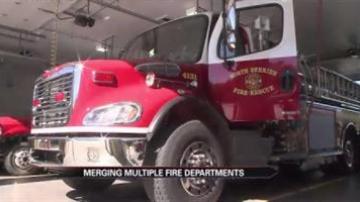 BERRIEN COUNTY, Mich. -- Would you pay a few extra dollars per month if it meant saving your life? Several townships in Berrien County are gauging the public’s interest on whether to consolidate fire departments.

It has been a topic of discussion for decades, but one local fire chief suggests they take another look at the option.

"If your child was choking, and you called 911, how long could you hold your breath?" said Chief Bob Ruff of the North Berrien Fire Department.

As chief of the North Berrien Fire Department, he's looking for ways to reduce them.

"Pride Care does a great job, but they've got a big area to cover," said Ruff.

For decades, homeowners around Coloma and Watervliet have struggled with getting fast emergency care.

Many of these townships are rural, meaning ambulances could take as long as fifteen minutes to get to the location of an emergency.

"What we're looking to do is to supplement and support, and help them to make sure the taxpayers we have out here are getting the best service possible," said Ruff.

By pooling the resources of North Berrien and Watervliet fire departments, Ruff is hoping they can reduce those response times.

Medically trained firefighters would be on-staff ready to help EMTs.

There is a cost though.

"If the citizens want to do it, and are willing to take on the expense to do it, and it's not a huge increase, then the municipal leaders will decide if they want to go further," said Ruff.

There will be a town hall discussion about this potential consolidation at the Berrien Senior Center in Coloma on October 23rd at 7 p.m.