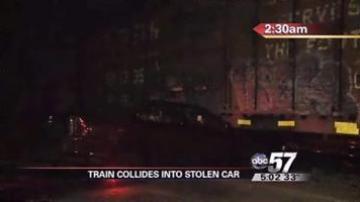 SOUTH BEND, Ind. -- A train slammed into a car near the intersection of Lincolnway and Twykenham around 1:30 a.m. on Wednesday. No one was in the car, and the engineer of the train was not injured.

The owner of the car was filing taxes at his business on Lafayette Street in South Bend. He received a call from police saying his car was stolen, left on the tracks and then hit by a train.

It all happened over an half hour time span. The car was left on the tracks and hit by a train traveling west bound.  No one was in the vehicle, and the driver of the train is doing fine.

The owner of the stolen car decline an on-camera interview. He said he is dissapointed with with all the crime in town, and wants something done about it.

Right now a Norfolk Southern crew is investigating the severity of the crash. Police are still looking for a suspect.