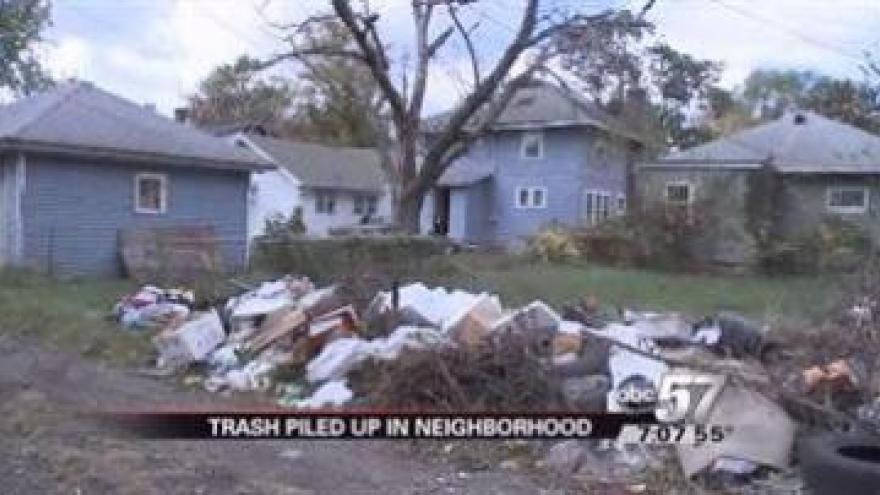 SOUTH BEND, Ind. -- Matt Fisher says he can't even look out his back window without seeing a mountain of trash.

"Finally own my own home with my partner,” said Fisher.

Unfortunately, now he can't even bear to go in his backyard because of what some neighbors have left behind.

"It makes my house look like trash; it brings the property value down on my house," said Fisher.

As I walked down the alley of Diamond Avenue, I saw old beds, ruined couches, and even clothes hanging in the trees.

Fisher says he called Code Enforcement about the problem, and in the trash they found mail with this address on it.

I knocked on the door and talked with the owner of the home, Emma Carter.

"My house?! Probably the guy who does my yard dumped it over there," said Carter.

Carter says she had no idea the guy who cleaned her yard dumped the trash behind Fisher's house. She says she will tell him to quit using Fisher's alley as a dumpster.

Carter says she will do her part to keep the neighborhood clean and she hopes others will too.

She would like to see the neighborhood return to what it was like 43 years ago when she first moved in, so she and her grandkids can play without the trash.

"It was beautiful; everyone kept their yards up," Carter reminisced.

I called code enforcement and they told me that they did go to the Diamond Street alley, but they cited Fisher for the garbage because it is behind his property.

If Fisher does not clean up the garbage in 10 days, Code Enforcement will clean it up, but Fisher will have to pay for the service.