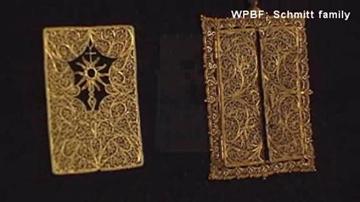 FORT PIERCE, Fla. (WPTV) -- Treasure hunters in Fort Pierce have found a rare and valuable artifact just 1,000 feet off of the coast.

The Booty Salvage crew says it has found the missing piece to an artifact that was discovered nearly 25 years ago from a Spanish shipwreck in the early 1700s.

The artifact was believed to be a golden picture frame for years. Now, the salvage team says the missing piece helped them discover that the item is really a pyx.

In Catholicism, a pyx is the vessel used to carry the consecrated Eucharist. The newly discovered pyx was likely used by a high ranking member of the Catholic church to deliver someone their last rites.

"There's nothing else like this piece in the world that's been published that we know about," said Rick Schmidt, part of the Booty Salvage Crew.

"To be able to find a piece that they thought was interesting back then and make it whole now, I mean, it's amazing," said Eric Schmidt.

The discovery was made on Memorial Day, and is the latest of the discoveries the Booty Salvage crew has made recently on a holiday.

Eric Schmidt said that they found nearly $300,000 worth of gold on Labor Day last year, and made another big discovery last Fourth of July.

"You don't stop when you're hot. You don't do that," said Schmidt.

Their latest discovery, however, has the crew most excited. "It's number one for me, for sure, with the history on it," Eric said.

The Schmidt family isn't sure how much the Pyx is worth, but assume it could be worth more than $500,000. They say they are hoping to get insight from the Catholic Church to get a better idea of what it is worth.