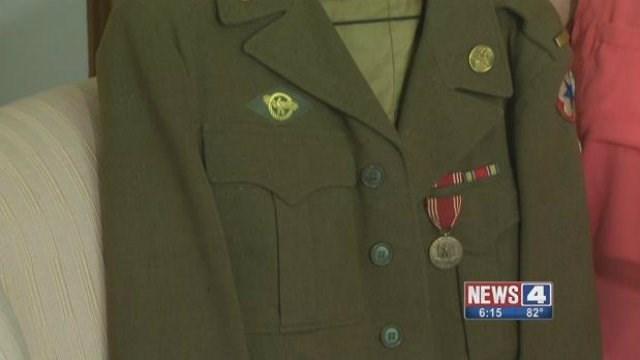 Edwardsville, IL -- Here's a story to warm your heart, especially if you have any veterans in the family.

A treasured military heirloom is now in the hands of a loving army widow.

That's thanks to one local woman who wanted to do the right thing and a "News 4 Investigates'" report.

The heirloom is an Army jacket that held a secret for almost 30 years. Now the secret is solved, in a moment that brought two women to tears.

Kathy Bold, at her home in Edwardsville, wanted to display her father's Army jacket. So, she'd gone to the closet where it had been buried deep for nearly 30 years.

Only after unzipping it out of its worn bag did she realize that the name inside wasn't her father's.

She contacted News 4, who contacted the National Archives. Bold's hope was to return it to the person who had donned it.

It didn't take long before an expert helped identify the markings inside.

Prescott lived a full life and died in 2010. However, after a little searching, News 4 found his widow, Noma Prescott, in Sanford, Florida.

Bold flew to Florida, and on Tuesday, she hand-delivered the jacket.

"It's just like a part of him that I didn't have before. Going to make me cry," Prescott said.

Two strangers are now friends because of a piece of history was so important to them both.

"Very happy. Anything that's connected to him makes me happy," said Prescott.

The mystery remains how Dewey's jacket ended up in Bold's closet, and that may never be solved.