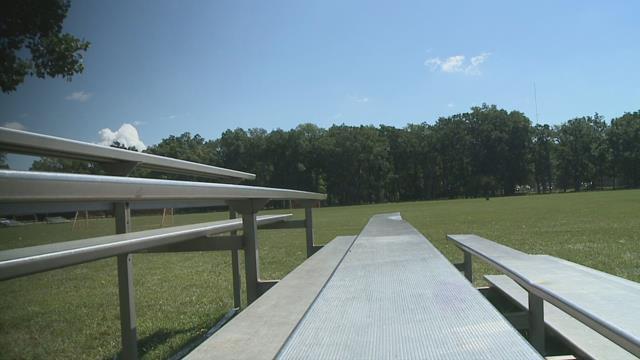 Rosendo Jimenez and his baby half sister were watching their father play soccer Sunday afternoon at Studebaker Park in Elkhart when a tree collapsed on the children and three other spectators. .

“People were there at the wrong time. It decided to just come down,” said Sara Garcia, Jimenez’s mother.

Jimenez, 7, suffered a few scrapes and bruises, but he’s okay.

“It’s like a double whammy. You’re glad your son is okay,” Garcia said.

Jimenez’s half sister on the other hand, died as a result of her injuries from the tree.

The baby, who was set to turn one soon after, wasn't able to live to see her first birthday.

She was being treated at Riley Hospital in Indianapolis.

Garcia had been keeping in contact with the baby’s father.

“She got a skull fracture. And she wasn’t breathing at the time, so they had to put a tube in her,” Garcia said.

As for the spot where it all happened, Elkhart Mayor Dick Moore says the bleachers aren’t usually placed in that spot.

“We did not put the bleachers there. Somebody probably did that to get the shade,” Moore said.

Garcia isn’t looking for anyone to blame.

“I think it’s just an act of nature,” Garcia said.

The broken bleachers and tree have been removed from the park.

The family has set up a GoFundMe page to help with expenses.