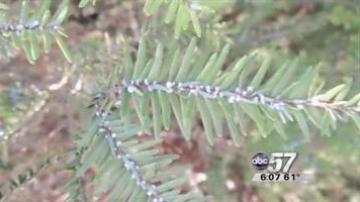 The Hemlock Wooly Adelged is an invasive bug from Asia that sucks the sap out of hemlock trees and kills them.

It's the first confirmed case in Southwest Michigan.

Right now, a small area between Union Pier and New Buffalo is under quarantine.

One neighbor we talked to is concerned because the state already took out some trees, because of the Emerald Ash Borer.

"The beetles were in the other types of trees.  I've seen a lot of trees get taken down, because of the beetles in the trees," said John Anderson, who lives in the quarantined area.

The state said it is working to get rid of the bugs in the quarantined zone.