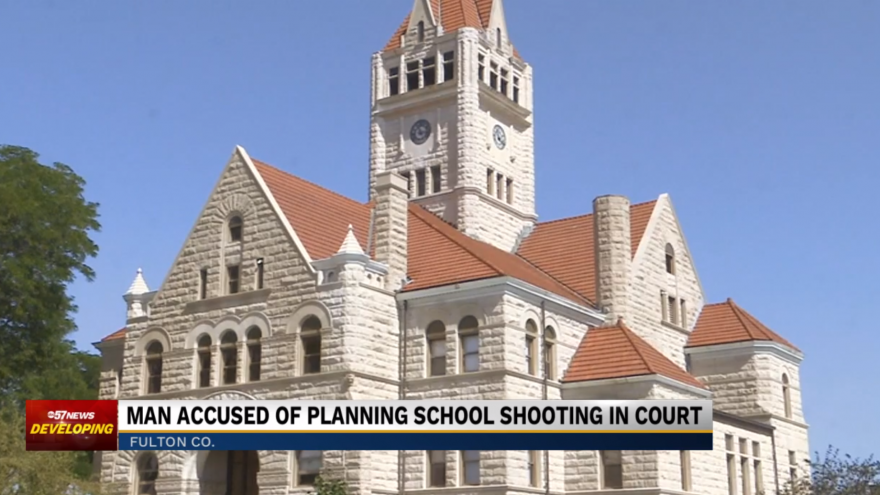 FULTON COUNTY, Ind. -- On day one of the jury trial, three people were called to the stand to dive into John Schultz’s alleged planning process.

Campbell testified on the stand first. He said that on July 13 of last year he received a tip from Schultz’s family member about John Schultz and Robins's plans to kill students and teachers inside Rochester High School and Caston High School.

Campbell spent days looking through their public Facebook posts, which had pictures of Schultz and Robin together and picture collages showing Dylan Klebold and Eric Harris, who were the shooters at Columbine High School in 1999.

He then obtained search warrants for both Schultz and Robins homes, where they found a list of items such as a propane tank and trench coats. Police also found names on Schultz’s bedroom wall and some quotes made from the Columbine shooters.

The defense argued that in both the public and private Facebook profile and posts, Schultz wasn’t holding any guns, the quotes weren’t his, and that the posts weren’t created by him.

Prosecutors also called Mitch Kajzerr to the stand. He’s a cybercrimes expert for the St. Joseph County Prosecution office. He testified that Lt. Detective Campbell requested digital forensic information on three of Schultz’s phones, As well as one phone, a computer, and three hard drives that belonged to Robin.

Kajzer said in Robins items, they found multiple keyword searches and pictures on the phone and hard drive like how to hide a bolster under a trench coat, school shooting, and how to obtain a gun underage at a Pawnshop.

"I think that with the state, we're proving to show that actions speak louder than words, and talk and start to become overt acts and furtherance of conduct to carry out a plan is, two or more people having a plan,” said Fulton County Prosecutor Michael Marrs.

Donald Robin Jr. will be testifying tomorrow during this trial. He was sentenced to 17 years in prison with nine years suspended for conspiracy to commit murder