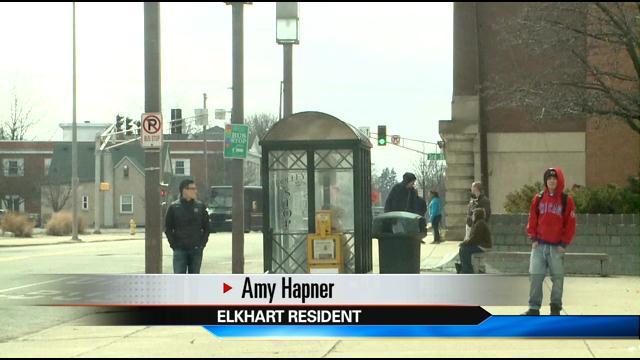 Imagine waiting nearly an hour just to get on public transportation. One Elkhart woman says she endures this on a regular basis.

A majority of the Interurban Trolley riders say waiting up to 45 minutes a day is normal. Over a year those hours add up to 11 whole days spent waiting.

Amy Hapner of Elkhart is not used to the sound of the trolley pulling up to her stop. Instead she says, she is often left wondering where the trolley is.

Hapner started using the trolley two months ago and it has been bumpy ride.

At the bus stops there is no real time information posted for riders, so they do not know exactly where the trolley is or if it is running at all.

“If there were some system put in place to let us know when the line is running late that would be something. If we knew they were running late but there is nothing absolutely nothing,” says Hapner.

James Turnwald the Executive Director at Michiana Area Council of Governments, MACOG, manages these trolleys and says updates are in the works.

“Creating social media accounts both on Twitter and Facebook for the trolley which would help give more instant access for riders to get up to minute information,” says Turnwald.

In order to address the issues of vehicles breaking down, Turnwald says MACOG has purchased seven new trolleys expected to be running by the end of the year.

“The current vehicles are getting kind of towards the end of their service life so sometimes there is a mechanical issue. We are purchasing new trolleys and we think these will improve the system,” says Turnwald.

Turnwald adds, the next step after implementing social media would be a free phone application that people could download to see the location of their buses in real time.

After testing social media and real time tracking technology, Turnwald says kiosks are something the department would look into for those who do not have access to a smart phone.

Hapner hopes to see these improvements soon because any more delays could cause major issues.

“It would impact my income because if I can't get to work I'm not earning my wages,” explains Hapner.