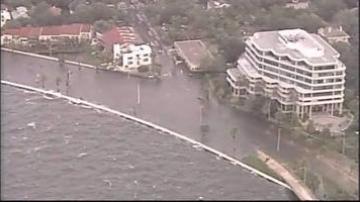 TAMPA, Fla. -- Republicans may have an unwanted visitor at their national convention in Tampa next week.

Experts say the city could be flooded if Tropical Storm Isaac strengthens and heads that way. Tampa's mayor said if the storm comes that way, public safety trumps politics.

It would be the second straight Republican convention affected by a big storm.

"If we had to make that decision to cancel or to postpone or to move the convention, we will do that knowing full well that my obligation and the city's obligation is to move people out of harm's way," said Tampa Mayor Bob Buckhorn.

Tampa officials say they're ready and they have solid evacuation routes planned.