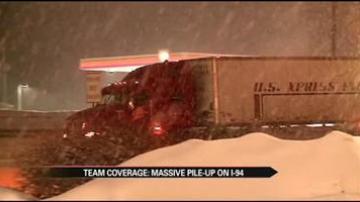 BERRIEN COUNTY, Mich. -- Many truck drivers said Monday night's pileup on I-94 was all too familiar, just two weeks after another monster crash shut down the interstate in Michigan City.  Both happened in similar white out conditions.

"It wasn't as bad as Michigan City but yeah you couldn't see anything," said truck driver Mike Bowen.

Some drivers played it safe and pulled off the roads to wait out the storm.

They said when roads get this bad, it's best to just play it safe, before you find yourself in the next interstate pileup.

"It looked like one vehicle just came up too close behind another vehicle, and then that just started a chain reaction," says Bowen.

Today 73° Times of sun and clouds