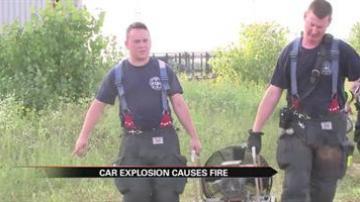 Firefighters from five departments responded to the fire at a storage facility near US 20 and Walton in New Carlisle.

Firefighters say Kenneth Sabasty tried to start his pickup truck when it exploded, starting a fire that spread to more than four cars.

Sabasty said he tried to put it out, but the flames were too strong.

“When it exploded, fire all over. And I just couldn’t stop it. It was something I had never seen before,” said Sabasty.

Firefighters said fighting this fire was a challenge because the building was set so far back off the street.

“To try to get this much equipment back to this location was kind of difficult. Temperature kind of played a part in it too, guys overheating,” said New Carlisle Fire Chief Joshua Schweizer.

Firefighters are now working to determine what caused that truck to explode.