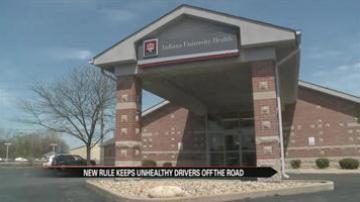 ST. JOSEPH COUNTY, Ind. -- On May 21, truck drivers must receive their medical exam required by the Federal Motor Carrier Safety Administration from the National Registry of Certified Medical Examiners. People who support the new rule say it will keep drivers with serious medical conditions off the road.

Truck drivers must have a medical exam every two years, but now they won't be able to go to just any doctor for their exam.

He's healthy, but he says some of his friends in the industry aren't. He says the new rule will keep those drivers with serious medical conditions off the road.

"It concerns me, because I know drivers in their 80s that are still driving," said Sheehy.

The law aims to provide some consistency by holding drivers and doctors accountable.

They don't want doctors to sign off on someone who has a condition like epilepsy or insulin dependent diabetes.

Dr. Stacey Leva is one of 16,000 examiners nationwide who completed the course necessary to make it on the list.

She likes the idea of adding another stopgap.

"Anything we can do to make the roads safer is obviously an admirable and worthwhile goal," said Dr. Leva.

It's still too early to know if the roads will become any safer because of the new rule.