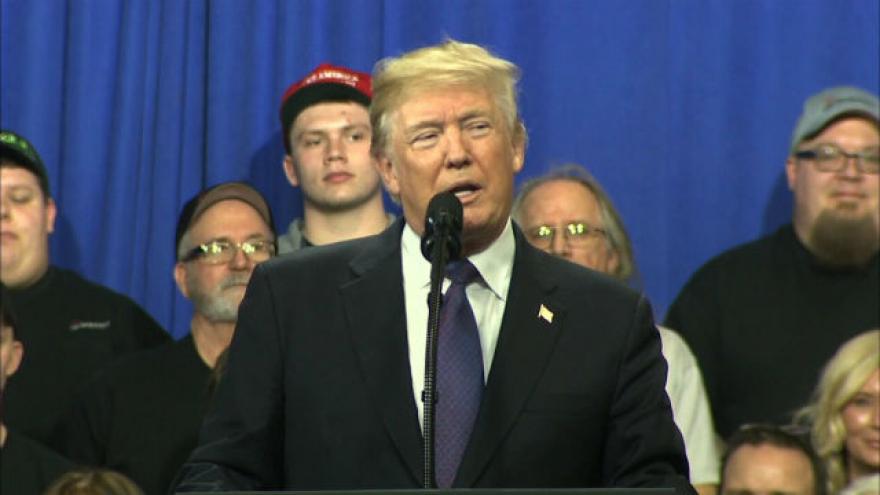 (CNN) -- It was easy to miss amid a 1,000-point stock market plunge, but President Donald Trump just launched his 2018 midterm election campaign.

For once, Trump was doing what presidents normally do Monday, traveling to an electoral bellwether state, Ohio, to drum home themes of an economic renaissance laid out in his State of the Union address last week.

There were also bewildering asides, withering off-script take downs of Democrats -- including calling them "treasonous" for not cheering last week's speech -- and the braggadocio with his tongue slightly in his cheek that made his 2016 campaign rallies compelling viewing.

And thanks to his characteristic habit of acting as a third party analyst of his own presidency, there were also signs that Trump might be seriously worried about his prospects in November, and even in 2020.

But Trump did deliver on the point of his trip, reeling off a targeted and effective electoral argument, claiming credit for healthy job growth, fattening wages following the passage of tax reform and claiming a rebirth of American manufacturing.

"Your paychecks are going up. Your taxes are going way down. And right now for the first time in a long time, and you've seen it, factories are coming back," Trump told his crowd in a suburb of Cincinnati.

"It's amazing what we have done together ... this has been an incredible journey," the President said, touting other promises kept, including the opening of Alaskan tundra to oil drilling and ending the Obamacare mandate.

Trump punctuated his speech by welcoming supporters to the stage for them to give glowing testimony about how the tax cut had changed their lives.

The event might not have given a full picture of how the measure's benefits are disproportionately enjoyed by the wealthy. But as a political message it helped Trump make progress on a crucial assignment -- selling the tax cut as a bonanza to the Middle Class and a winner for businesses that create jobs that will leave the whole country better off.

"When our workers win, who really wins? Our country wins, because we are all in this together. We're one team, one people and one family," Trump said.

A Monmouth poll published last week suggested that the President's sales effort might be beginning to work. Some 44% of those asked approved of the new law, a big jump from the 26% who backed it in December.

Some of what Trump said was vulnerable to a fact checker. His rosy view of an economy that benefits everyone will draw a Democratic counter-narrative as the opposition party tries to win back the Senate and the House.

But it represented a coherent package for Republicans as they try to whip up turnout and fight complacency in the face of a raging liberal base of voters who cannot wait to weigh in against the President.

As Trump's 2016 election win showed, a strong sense of narrative connected to a candidate's political base is essential, and the President's appearance on Monday suggested he is some way along in fine-tuning his own story.

Democrats, who failed to counter the power of Trump's outsider message in the industrial Midwest in 2016 have yet to offer such a rounded argument on the big stage.

Given Trump's low approval ratings that have improved somewhat in recent weeks to the low 40% range, and the history of first-term presidents getting a bloody nose in midterm polls, the economy is the best card the GOP can play.

But the 4% plunge in stocks that came at the very moment Trump spoke on Monday, giving him an awkward split screen moment on cable TV, was a reminder of the high risk nature of that strategy if things go wrong.

After all, there's no guarantee the economy will keep roaring. A prolonged stock market correction, or action by the Federal Reserve to raise interest rates to stifle inflation could dampen consumer confidence and have a direct political impact. It's a long way until November.

Trump also signaled that a comment by House Democratic leader Nancy Pelosi that bonuses given to some workers by corporations were "crumbs" compared to the huge windfall their employers have reaped through the tax cut, will be a hook for the entire GOP campaign.

Republicans appear to believe they have a rhetorical gem comparable to Hillary Clinton's notorious reference to Trump supporters as "deplorables" that animated the 2016 election campaign.

"I really think her statement 'crumbs' will be equivalent. I think this is not a good day for Nancy Pelosi, she is our secret weapon," Trump said.

In the electoral context, it doesn't matter that the remark by Pelosi at a press conference in Washington has been ripped out of context.

In the same way as Trump's bold claims about the economy often exaggerate reality, Pelosi's remark will serve as a thematic talking point for Trump's attempts to fire up the voters who helped him win the White House as he battles to safeguard Republican majorities in Congress in November.

Even if the economy is still doing well: the many other complications of Trump as president, including the Russia probe, his own unpredictable behavior, and even a possible looming war on the Korean peninsula could emerge as dominant themes and help Democrats.

In many ways, 2018 could be the ultimate test of the mantra that in elections "It's the economy, stupid," a theme first voiced by Bill Clinton's 1992 campaign.

While Trump is a strong performer on the stump, and wants to throw himself into campaigning for the GOP majority in the midterms, a few moments in Monday's appearance showed why some vulnerable Republicans in swing districts might want to keep him at arms' length.

His comment that Pelosi and her Senate counterpart Chuck Schumer were "treasonous" because they didn't clap his State of the Union address might have delighted voters who flocked to Trump because of his refusal to bow to political correctness.

But they also overshadowed the rest of the speech, could fan doubts among independent voters who worry about his temperament and are sure to give Democrats yet another reason to go out in November to vote against him.

And there were signs in Trump's speech that he has the jitters about how things could turn out in November, as Democrats eye an unexpectedly strong showing in the Senate and have genuine hopes of seizing the House, a scenario that could potentially present Trump with an impeachment drama down the road.

He mused on the unfortunate history of first-term presidents and midterm elections, suggesting that voters who saw the gains of a big presidential election win suddenly became complacent only two years later.

"They sit back and then they get clobbered, because the other people are desperate, and they get out and they have more energy," he said, arguing that his "tremendous success" made him even more vulnerable to such a fate.

In another stream of consciousness digression, Trump suddenly started pondering his prospects in his own re-election race, wondering what a bad showing in November would portend for his hopes of a second term.