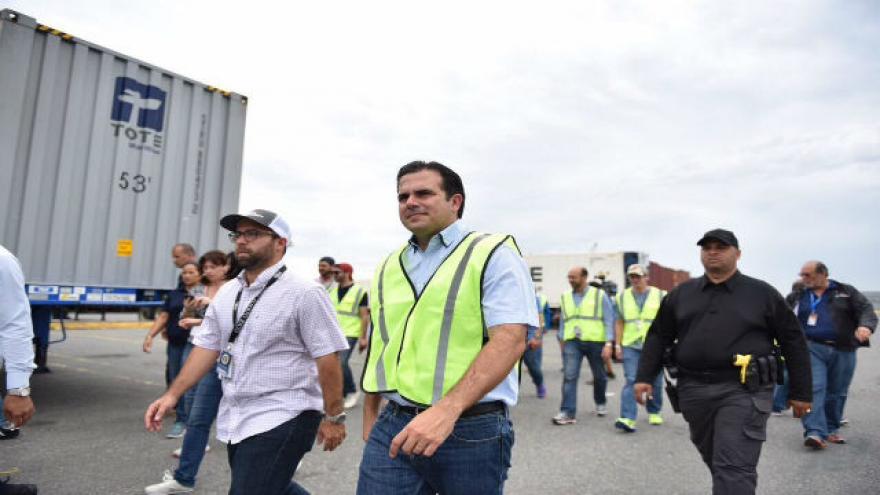 (CNN) -- President Donald Trump said Thursday that Puerto Rico faced a situation "worse than Katrina" as he explained why he was rating his administration's response to the hurricane a 10 out of 10.

Trump previously compared the situation in Puerto Rico to the aftermath of Hurricane Katrina during his visit to the island earlier this month when he suggested Hurricane Maria wasn't "a real catastrophe, like Katrina" in terms of the number of casualties.

Trump on Thursday appeared to flip the comparison to his benefit, suggesting that the devastation in Puerto Rico was worse than in New Orleans during Katrina -- but the federal response was far more competent.

Trump's argument: Puerto Rico was first partially hit by Hurricane Irma and then hit "dead center" by Hurricane Maria, which was just a couple miles per hour away from a Category 5 hurricane.

Rosselló, ahead the meeting, said he plans on discussing "pressing needs" with the President.

He said a lot of work has been done on the island in the aftermath of the hurricane, "but there's still a lot of work to go ahead."

Rosselló met earlier Thursday with Republican Sen. Marco Rubio of Florida, who's been heavily engaged in Puerto Rico's recovery, before heading to the White House in the afternoon.

"In these emergencies, things might have the appearance that they are stabilizing at one point, but you always have future problems that can arise such as public health emergencies and otherwise," Rosselló told reporters. "We really want to take all of the big picture."

Trump has taken heat for his handling of the response to the devastation on the island, most notably after he tweeted last week that Washington could not keep aiding Puerto Rico "forever."

"We cannot keep FEMA, the Military & the First Responders, who have been amazing (under the most difficult circumstances) in P.R. forever!" Trump wrote.

White House chief of staff John Kelly said last week that Trump's tweet was "exactly accurate" because first responders "are not going to be there forever."

Rosselló said Puerto Rico needs "equal treatment" with Florida, Texas and the US Virgin Islands, which were also hit by massive storms this hurricane season.

"We're all in this together," he told reporters.

His visit with the President also comes just days after Trump blamed some of the recovery problems on the island on local distribution efforts.

"Right now, it's working. It's augmenting significantly," he responded. "We're working with the municipalities. I've hosted the national guard in Puerto Rico to help with the logistics. I sent out our auditors from the Treasury Department so that they can have accountability over what's going on."

Rosselló said there have been "investigations" into the "proper management" of resources, but "our efforts still at this moment are life-sustaining efforts."

As of Thursday, 21.6% of the island had power and 78.6% of gas stations are up and running, according to an official website with updates on recovery efforts. Rosselló said Thursday morning that the death toll stood at 48 but he was expecting to hear an update later in the day.

Last week, the House approved a $36.5 billion disaster relief bill in the wake of not only Hurricane Maria but the devastating hurricanes that hit Florida and Texas, as well as a string of wildfires out West. The bill awaits passage by the Senate.

Rubio said he was not contesting the amount of money that Congress is trying to send to Puerto Rico but took issue with the requirements Puerto Rico has to meet — like making damage assessments — in order to use the funds.

"They're not going to be able to do that in a timely fashion because they're still out there trying to restore power and get water and food to people," he said.

Rubio warned that the situation has grown so drastic in Puerto Rico that their government could shut down "in the next 30-45 days."

Rubio said he was told Thursday morning in the briefing with the governor that the Army Corps of Engineers has yet to begin executing power restoration on the island -- though Rubio cautioned that he needed to confirm that information.

"If that's not accurate and there's another side of that story, we need to learn it. But if that's accurate, then obviously we need to start asking questions as to why," he said.