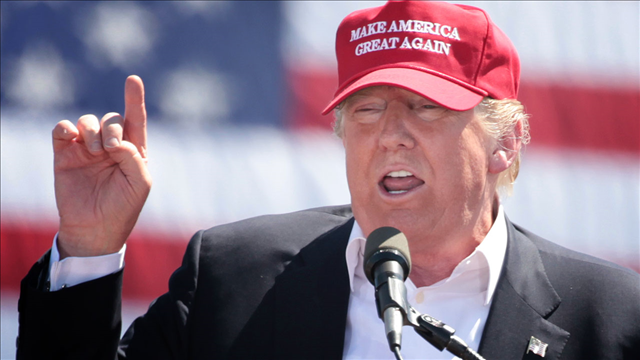 TOLEDO, Ohio (CNN) -- Donald Trump on Thursday referred to inner cities for the first time on the campaign trail as "ghettos" as he promised as president to tackle the problems facing low-income African-Americans.

"And we're going to work on our g-ghettos, are so--" Trump said, appearing to trip on his next words as he stumbled through his sentence. "The -- you take a look at what's going on, whether you have pockets of, areas of land where you have the inner cities and you have so many things, so many problems. So many horrible, horrible problems."

Trump used the word as he once again described the lives of African-Americans in starkly bleak terms.

The word ghetto, which Merriam-Webster defines as "a part of a city in which members of a particular group or race live usually in poor conditions," is no longer used in mainstream political discourse.

While Trump on Thursday specifically referred to blacks living in inner cities, the Republican presidential nominee has frequently described the lives of black Americans as riddled with crime, violence and a lack of economic opportunity. African American leaders have deemed that picture of the black community deeply offensive as a majority of black Americans are not poor.

Trump has also argued that many US inner cities are "more dangerous than some of the war zones," and suggested that African Americans can get "shot" for simply walking down the street.

His use of the word "ghetto" came a day after he once again pitched himself to black voters in a speech in which he promised a "new deal for black America" and laid out policies that he said would sprout "urban renewal."

In that speech, Trump reminded voters the Republican Party is the "Party of Lincoln" and said that he hoped to once again make the party a "home" to black voters.