Trump says appeasement 'will not work' after N.K. nuclear test 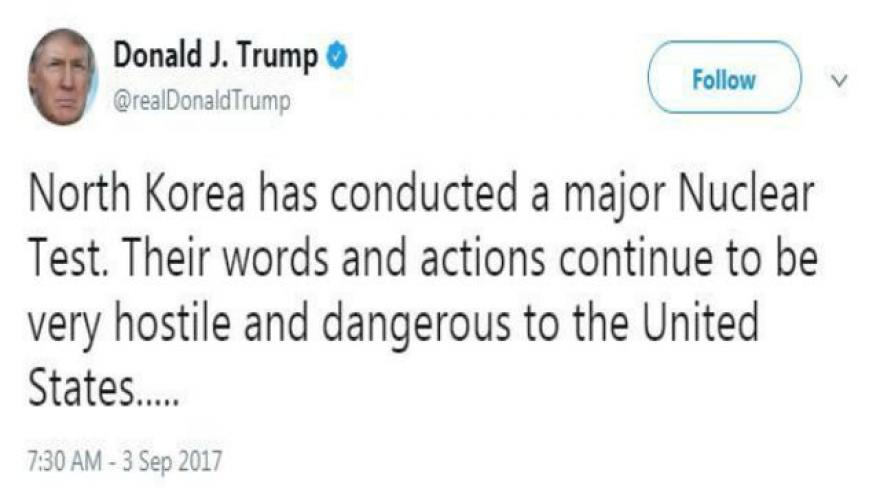 President Trump responded to North Korea\'s most recent nuclear test with a series of tweets, calling Pyongyang\'s words and actions \"hostile and dangerous\" and saying \"talk of appeasement will not work.\" Photo courtesy Twitter / @realDonaldTrump

(CNN) -- President Donald Trump condemned North Korea's claimed test of a hydrogen bomb in a series of tweets Sunday morning, calling Pyongyang's words and actions "hostile and dangerous" and saying "talk of appeasement will not work."

"North Korea has conducted a major Nuclear Test. Their words and actions continue to be very hostile and dangerous to the United States," Trump wrote, adding that Pyongyang "has become a great threat and embarrassment to China, which is trying to help but with little success."

"South Korea is finding, as I have told them, that their talk of appeasement with North Korea will not work, they only understand one thing!" the President wrote.

This is North Korea's sixth-ever test of a nuclear weapon and the first since Trump took office.

The test was a "perfect success" and the final step in attaining a "state nuclear force," North Korean news anchor Ri Chun Hee said in a televised announcement Sunday.

The news report claimed the weapon was designed to fit atop an intercontinental ballistic missile. The nuclear test follows two successful tests of the long-range missile in July and a shorter-range one in late August.

In a high-level national security meeting, South Korean President Moon Jae-in called the move a "an absurd strategic mistake" that will lead to the international community further isolating Pyongyang.

NORSAR, an independent seismic monitor, estimated the blast created a yield of about 120 kilotons. The tremors caused by North Korea's Sunday test were at least 10 times more powerful than the fifth test, Japanese officials said. An official at the Korea Meteorological Administration estimated the blast was about 50 kilotons.

The test came just hours after North Korea released images of leader Kim Jong Un inspecting what it said was a hydrogen bomb ready to be put on top of an intercontinental ballistic missile, the type of weapon the country would need to use to deliver a nuclear warhead to far-away locations.

Sunday's test comes almost one year after Pyongyang's fifth nuclear test last September, which triggered a 5.3-magnitude seismological event. That took place on September 9, the country's Foundation Day holiday. North Korea claimed it set off a thermonuclear weapon during that test, but experts said the data showed it was more likely a boosted fission weapon.

China, North Korea's only real ally and patron, said its neighbor "disregarded universal opposition of the international community" by conducting the test."

"We strongly urge North Korea side to face up to the firm will of the international community on the denuclearization of the peninsula, abide by relevant resolutions of the UN Security Council, stop taking wrong actions that exacerbate the situation and are not in its own interest, and return to the track of resolving the issue through dialogue," the Chinese Foreign Ministry said in a statement.