Trump unloads on Twitter ahead of joint press appearance in Vietnam 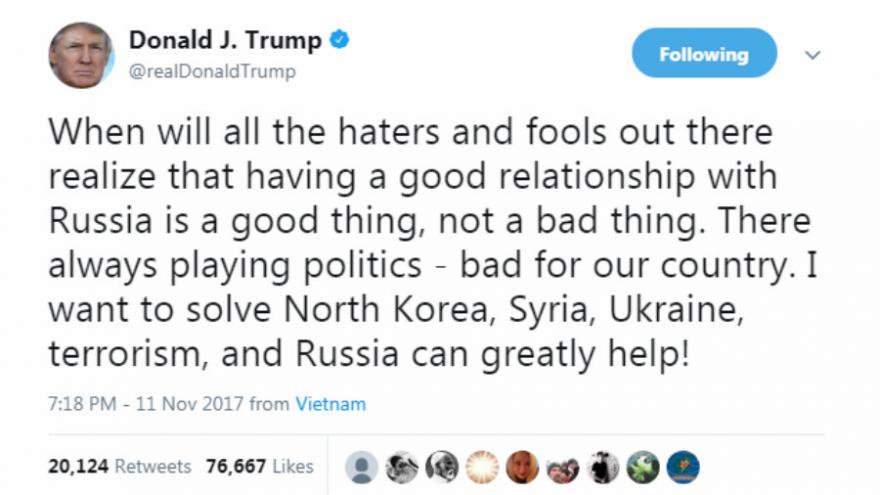 (CNN) -- President Donald Trump unleashed a series of tweets Sunday morning as he nears the end of his epic 13-day diplomatic tour of Asia, going after "haters and fools" who question his ties to Russia and mocking the shape of North Korean dictator Kim Jong Un.

The stream of invective came after days of relatively restrained tweeting as Trump darted between Asian capitals on his first presidential trip to the continent. His anger at the Russia allegations burst forth after he told reporters aboard Air Force One on Saturday that he believed Russian President Vladimir Putin is sincere in his denials that Moscow attempted to sway the presidential election.

"When will all the haters and fools out there realize that having a good relationship with Russia is a good thing, not a bad thing," Trump wrote at 7:18 a.m. local time in Hanoi.

He spent the night here after a state dinner, and will hold talks and a joint news conference with Vietnamese President President Tran Dai Quang on Sunday morning.

"There (sic) always playing politics - bad for our country," he added. "I want to solve North Korea, Syria, Ukraine, terrorism, and Russia can greatly help!"

In a second posting at 7:43 a.m., Trump wrote: "Does the Fake News Media remember when Crooked Hillary Clinton, as Secretary of State, was begging Russia to be our friend with the misspelled reset button? Obama tried also, but he had zero chemistry with Putin."

He was referencing a 2009 episode in which Clinton, then secretary of state, presented her Russian counterpart, Sergey Lavrov, a small red button with the Russian word "peregruzka" printed on it.

"We worked hard to get the right Russian word. Do you think we got it?" she asked Lavrov, laughing.

"You got it wrong," said Lavrov. The correct word for "reset" was "perezagruzka," he explained. "Peregruzka" means "overcharged."

Trump has long insisted that a better relationship with Russia could help solve vexing global problems, including ending the civil war in Syria and containing North Korea.

Trump has worked while in Asia to consolidate support behind his efforts to choke off support for Pyongyang, and delivered stern warnings to Kim during stops in Tokyo and Seoul.

But his message on Twitter Sunday delved further into the types of personal insults that colored his rhetoric about the dictator before arriving in Asia.

"Why would Kim Jong-un insult me by calling me 'old,' when I would NEVER call him 'short and fat?'" Trump wrote at 7:48 a.m. "Oh well, I try so hard to be his friend - and maybe someday that will happen!"

He appeared to be responding to North Korea's statement last week that Trump is a "dotard," implying senility.

The flurry of tweets on Sunday came as Trump approaches the end of his Asia trip. He will depart midday for Manila, the Philippine capital, for a summit meeting of Southeast Asian leaders.

"Will be doing a joint press conference in Hanoi, Vietnam then heading for final destination of trip, the Phillipines," Trump wrote, misspelling the name of his next stop.

Trump had remained dutifully on script during his visits to Japan, South Korea, China and Vietnam, including on Twitter, where his postings have stuck to the talking points he's delivered during his stops.

But after a formal meeting with Putin was stymied during his visit to an economic summit in Da Nang, Vietnam, Trump held forth with reporters about the damage the Russia investigations unfolding in Washington are having on Washington-Moscow ties.

"Every time he sees me, he says, 'I didn't do that' and I believe, I really believe that when he tells me that, he means it," Trump said, referring to Putin's denials that Russia meddled in the US election. "But he says I didn't do that. I think he is very insulted by it, if you want to know the truth."