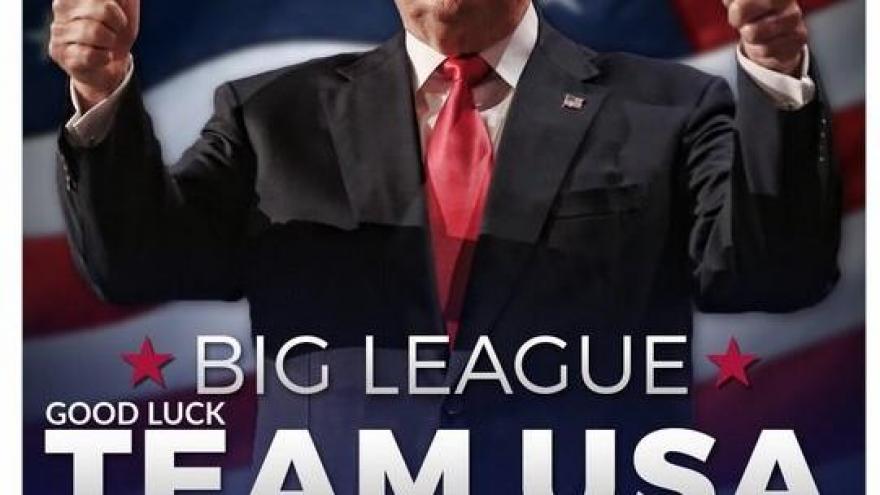 WASHINGTON (CNN) -- Donald Trump wished the US Olympic team good luck on Friday -- and may have cleared up a "bigly" debate in the process.

On the night of the 2016 Olympics' opening ceremonies in Rio, Trump posted an image of himself to Twitter and Facebook, giving a thumbs-up with the words "Big League" and "Good Luck Team USA" overlaid.

"Big league" is a favorite phrase of Trump's to describe something being done to a high or extreme degree.

An example from a November rally: Hillary Clinton is playing the "women's card big league."

Another, this time in March to describe Republicans running against him: "They are losing big league."

Said quickly, however, the phrase sounds like "bigly" -- a portmanteau that has not gone unnoticed by the Twitterverse in recent months.

"'I hold in the highest esteem Sen John McCain.' - Trump endorsement. Of course, had he not been captured, I'd hold him in more bigly esteem," actor Jeffrey Wright tweeted Saturday.

The Daily Beast recently got the phrase in a headline: "Donald Trump has many positions on many, many things. Except windmills. He hates them. Bigly:"

"America's going to start winning, and winning bigly," Fallon said in a May sketch.

But it remains to be seen whether Trump's Olympic tweet will clear the air.