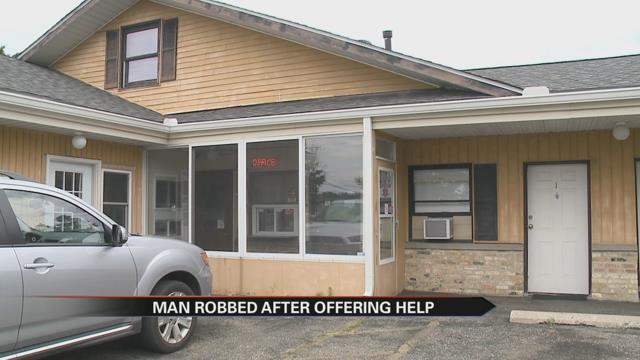 A motel owner says a down on their luck couple, who he tried to help, robbed him.

Jay Sing Ghogale, owner of Westwood Motel on State Road just outside of South Bend city limits did not even really know the couple. But he offered them work and a place to stay.

He never imagined his kind acts would be repaid with betrayal.

“I respected them I never thought these people would be able to do anything,” says Ghogale.

Police reports say Matthew and Nicole Sanders first rented a room at Westwood Motel last week and could not afford the tab.

Ghogale says he is a very trusting man so when Nicole approached Ghogale to explain she could not afford the room, he offered them work.

On Wednesday the couple cornered Ghogale in the motel’s office and demanded money and threatened his life.

“I knew that if I said one word against them to get them mad they would smash me- smash my face,” says Ghohale.

Ghogale was not hurt but the couple did get away with close to $1,300, according to reports.

Police ask if you have any information on the couple you contact Crime Stoppers or the St. Joseph County Police Department.