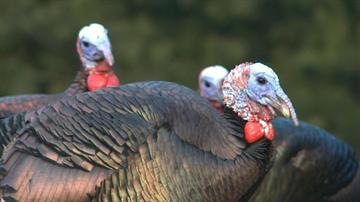 GRANGER, Ind. – It was turkey terror last Thursday as a group of the big birds walked across Bittersweet Road near the intersection with Anderson Road during rush hour.

"Oh, yeah, the traffic was all slowed down, police car was out, the fire truck was coming out just trying to move the turkeys out of the way," described Dan Hassan, who witnessed to confusion.  “The fire truck couldn’t move them either, he was honking his big horn, had the siren going on and they just won’t go.”

Cell phone video shows a St. Joseph County Police Officer trapped in his car by the turkeys as they pecked away at the outside of his cruiser.  Hassan wasn’t surprised to see the officers and firefighters having trouble with the birds.  He works at the Car Place, a nearby car dealership that is visited often by turkeys.

"They come out and visit us about once a day when the weather's decent, they come up to the door too, like to peck on the cars and jump on the cars," he explained.  “I try to chase them away from the lot honking the horns of our cars and they just like to chase the cars, so I knew the police wouldn’t do any good either, seems to irritate them more than anything else.”

According to Hassan, the birds started showing up a few years ago.  They often peck at their reflections on cars and even on the front door.

“The mail man was scared of them the other day, but they’re pretty friendly,” he described.  “They’ll peck on the doors, occasionally they’ll hop on the hood of a car which we have to watch out for because they do have sharp claws.”

The lot behind the Car Place is covered in turkey tracks.  On the other side of the woods behind the business, Mitchell Miller has a flock of turkeys who’ve taken up residence in his fields.  Three males are known throughout the neighborhood for their odd behavior.

"We call them ‘the three stooges’ in the neighborhood,” Miller explained, with the turkeys close behind him.  “They're three clowns, they always run around together; you never know where you're going to see them, out in the middle of the road, your back porch, sitting on your front step."

Mitchell demonstrated that the three Toms (male turkeys) chase after his truck when he drives it around the fields.  He thought it likely the “three stooges” were the ones who tied up traffic on Bittersweet last Thursday.  He even posted a turkey crossing sign on his mailbox.

“They spend a lot of time on the road, more than they probably should,” he explained.  “Most people stop and take pictures with their phones and roll down their window and let their children look at them, they’ll stay on the road until somebody doesn’t slow down and then they get out of the road.”

Mitchell has some theories about why the trio is more aggressive than most turkeys.

“I would imagine when they were young, maybe two-years-ago, somebody was hand-feeding them a bit,” he guessed.  “The turkey population’s growing all over the state and all over the area.”

Male turkeys are known to be aggressive towards their own reflections, thinking it's a competing male.  Another explanation for the recent behavior may also be that, if the weather is good, mating season for wild turkeys can begin as early as February.