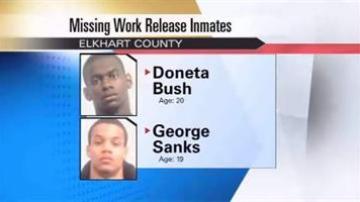 GOSHEN, Ind. -- Two accused criminals are on the loose after walking way from a work release program in Elkhart County.

Police say that Doneta Bush and George Sanks walked out a back door.

They are both considered non-violent offenders.

Bush was book on a warrant and Sanks for burglary.

Officers say they were a work release facility on Cottage Avenue in Goshen when they took off.

So far, no word on where they are.