'Two and a Half Men' star apologizes for remark 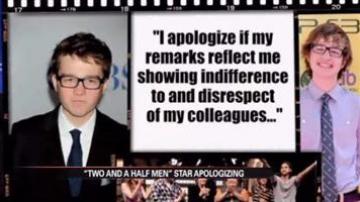 It was a highly critical video that went viral but now the star is apologizing.

"Two and Half Men" star Angus T. Jones has been on the show for nearly a decade.

He then released an apology stating, "I'm sorry if my remarks reflect me showing indifference to and disrespect of my colleagues."

Jones is not expected back on set until next year because his character joins the Army.