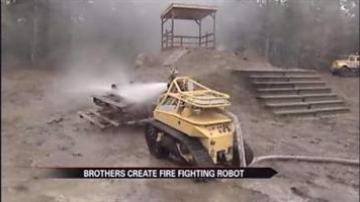 WATERBORO, Maine. -- Two brothers known for their work in robotics have developed a tool to help fight fires.

Over the past decade twin brothers Mike and Geoff Howe have developed an array of controlled vehicles mostly for the military.

Their latest design was developed to fight fires from a safe and secure distance leaving humans out of harms way.

Dubbed "The Thermite" they applied the same high technology used to fight wars, to fight fires.

"We're able to send a robot in, address it, literally recon, send information back to the fire and rescue but also address it as in put the fire out," said Geoff Howe.

"Not only is it a reduction in risk and you're managing your risk a lot better but it's also a reduction in cost because insurance premiums will be a lot lower and less people will be hurt and injured," said Mike Howe.

They launched the project days after witnessing one of the world's "worst" hazardous situations, the nuclear meltdown in Fukushima, Japan.