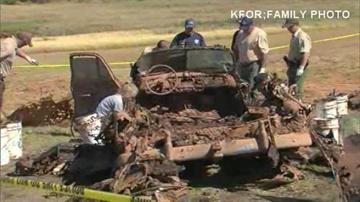 FOSS LAKE, Okla. (CNN) -- It may be years before the six bodies found inside two cars buried at the bottom of Foss Lake in western Oklahoma are identified. But the discovery may bring some closure to the families of six people missing more than 40 years.

The cars have spent more than 40 years at the bottom of Foss Lake.

Investigators can peel apart the metal and hardware with their bare hands.

The clues include 2 corroded rifles, a muddied wallet and purse and the remains of 6 people, 3 in each car.

It's one fluke discovery that might have solved 2 years-long mysteries.

In 1970, 3 teenagers in a 1969 Camaro disappeared: the mystery of what happened to Jimmy Williams, Michael Rios and Leah Johnson made headlines in the local newspapers.

The year before, in April of 1969, John Alva Porter and 2 friends were driving around in a 1950s Chevy and never seen again.

More than 40 years later, 2 cars matching those descriptions were found sitting right next to each other in the lake.

Debbie McManaman was 13-years-old when her grandpa Porter vanished.

"He was here one day and next day he was gone, no trace, no clue at all. His bank account there, his house was locked up, utilities were on, he just walked away," said McManaman.

Alvie Porter, as he was known, performed in wild, wild west shows riding bulls around Oklahoma.

Porter's oldest son, Ervie Porter, is now 85 and suffering from dementia. After investigators stopped looking for his father, he acted as his own detective, hunting down every clue he could.

"Still looking for him. But this is going to help me a whole lot," said Ervie.

It wasn't until the cars were pulled out of the water that the bones were found inside.

Divers went back in the water and found even more remains.

The Oklahoma medical examiner will use DNA to identify the bodies. It could take days, maybe even years to do that.

Alexa White's mother was John Porter's sister. She hopes her mother can finally find the answers that have eluded their family for more than four decades.

"It has been difficult not knowing what did happen to her father, she never had that closure or that peace of mind, comfort, why can't we find what happened and I'm hoping that this will bring closure," said White.

Investigators say they have not ruled out foul play yet, but they suspect that these six victims accidentally drowned, that the cars rolled into the water, and the victims were trapped inside.