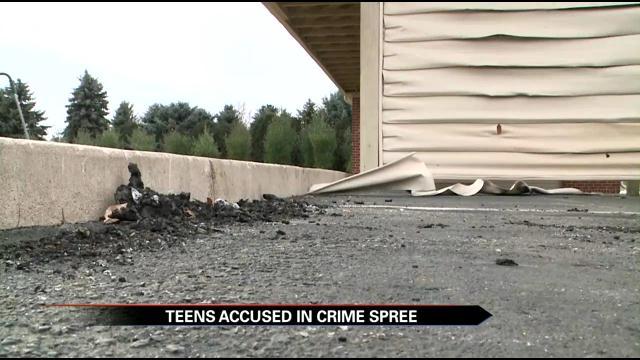 Two Elkhart county teens are accused of going on a crime spree through Elkhart County. Both are facing several felony charges.

A 16-year-old and 17-year-old are suspected of a list of crimes including stealing an SUV, burglarizing a home, torching that stolen vehicle and possessing a controlled substance.

The Elkhart Sheriff's Department says the crimes happened in Elkhart and Goshen.

Around 9 a.m. Wednesday, Elkhart County Sheriff's deputies took a report of a stolen Chevy Trailblazer. It was taken from a driveway off S 9th Street and County Road 20 in Elkhart.

About two hours later, a residence of the Willows mobile home retirement community home was broken into. Valuables like TVs, jewelry, watches and an antique rifle were stolen.

Around 11:10 a.m. the teens are accused of taking a 12 minute drive to the Ashton Pines Apartment Complex in Elkhart.

Officers say they torched the stolen Trailblazer. The flames were so hot it melted the siding of a carport.

Deputies say the teens didn't make it far after the arson. Both were found walking in the Meijer parking lot off US 33.

The 16-year-old and 17-year-old were both arrested and booked at the Elkhart County Juvenile Detention Center.
Share this article: