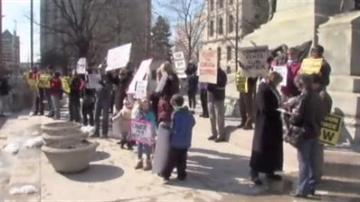 INDIANAPOLIS — Organizations both for and against reforming gun control laws made their voices heard outside Indiana's statehouse.

The two groups with two very different platforms held rallies. One was called "Indiana Moms Against Gun Control" and the other was called "Moms Demand Action for Gun Sense in America."

Each had petitions for people to sign that they plan to send to federal lawmakers.

Both sides say they want lawmakers to better understand where they're coming from.

"The Second Amendment is under attack and we need to stand up and say that we are not going to stand for it," said Melinda Porter of Indiana Moms Against Gun Control.

The groups did have one thing in common.

They want to stop the killings of innocent victims and protect children.