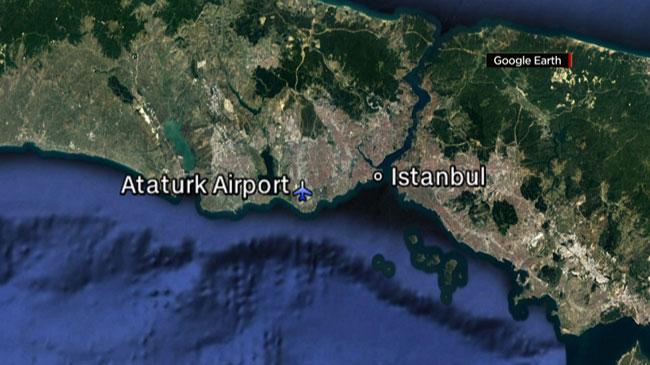 (CNN) -- The organizer of the Istanbul airport massacre is a well-known terrorist from Russia's North Caucasus region who served as a top soldier in the ISIS war ministry, a U.S. official said.

Akhmed Chatayev is the man who directed the three suicide bombers in the attacks that killed 43 people Tuesday, said Rep. Michael McCaul, chairman of the House Committee on Homeland Security.

While his whereabouts are unclear, his ties to jihadist activities are well documented, McCaul said.

"He's ... probably the No. 1 enemy in the Northern Caucasus region of Russia. He's traveled to Syria on many occasions and became one of the top lieutenants for the minister of war for ISIS operations," he told CNN's Brianna Keilar.

At least 230 others were injured when the trio stormed Istanbul's Ataturk Airport and opened fire with rifles before detonating bombs. Two of the men targeted the international terminal building, and the third one gunned down people at the parking lot.

Of the hundreds wounded, 80 are still hospitalized, Istanbul officials said.

"We believe he (Chatayev) coordinated with the three suicide bombers in Istanbul to conduct this attack during the season of Ramadan," McCaul said.

Last year, the U.S. Treasury added Chatayev to its list of terrorists, saying he was planning attacks against U.S. and Turkish facilities. The United Nations said he directly commands 130 militants.

Officials believe the three attackers are from Russia, Uzbekistan and Kyrgyzstan, and entered Turkey a month ago from Syria's ISIS stronghold of Raqqa.

They brought with them suicide vests, bombs and a deadly plan from ISIS leadership.

Two have been identified as Rakim Bulgarov and Vadim Osmanov, according to Turkey's state news agency Anadolu, citing an anonymous prosecution source. The report did not identify the third attacker.

The source did not provide information on the nationality of either man, Anadolu reported, though the source said Osmanov was identified through a passport photocopy that was given to a property agent in Istanbul's Fatih district, where officials have said the three attackers had been renting an apartment.

McCaul said his information on Chatayev came from Turkish intelligence. Turkish officials have not confirmed Chatayev's involvement to CNN.

The allegation reflects a growing trend of battle-hardened fighters from Russia and former Soviet republics joining ISIS in recent years.

"Russian citizens -- many of whom are Chechens or Dagestanis from the largely Muslim North Caucasus region of Russia -- are the largest group of foot soldiers in ISIS from a non-Muslim majority country," analysts Peter Bergen and David Sterman wrote in an opinion piece for CNN.

Russians deployed brutal tactics in Chechnya, which radicalized the insurgents and moved them in an Islamist and militant direction, said Bergen, a CNN national security analyst.

In October, Russian President Vladimir Putin said between 5,000 to 7,000 fighters from Russia and the former Soviet republics are in Syria.

"Ask anybody inside ISIS or who's fought ISIS. People from the former Soviet Union tend to be the most ... willing to die," said CNN contributor Michael Weiss, author of "ISIS: Inside the Army of Terror."

Chatayev's alleged connection may not be a surprise.

Turkish officials have strong evidence that ISIS leadership was involved in the planning of the Istanbul terrorist attack, a senior government source told CNN.

And the attacks appear to have been well-organized. The three terrorists rented an apartment in the Fatih district of Istanbul after they arrived from Syria a month ago, officials said.

After the airport attack, authorities discovered one of the terrorists left behind his passport in the apartment, according to a Turkish government source.

One man who owns a real estate agency said one of the men in the picture had lived in his apartment. He said he was shocked the man was a suspect in the attacks.

No claim of responsibility

While no one has claimed responsibility for the airport assault, Weiss said the nationalities of the terrorists point to ISIS involvement.

"One of the toughest battalions in ISIS is called the Uzbek battalion," he said. "These were the guys who were essentially on the front lines guarding Falluja, the city they just lost in Iraq."

The tactic used in the airport attack -- shooting, and then detonating explosives -- is called "inghimasi," and it's being used more frequently by terrorists.

"The 'inghimasi,' their (modus operandi) on the ground in Syria and Iraq, is to shoot up checkpoints and then they actually -- some of these guys actually run up to the enemy and hug them before detonating the bomb to take them out with themselves. So in a sense, the ultimate Kamikaze warrior," Weiss explained.

ISIS also has a history of airport attacks. It claimed responsibility for dual suicide bombings at the main airport in Brussels in March. At least 10 people died in those blasts.

Those killed came from all over the world, but most were Turkish, including 10 airport employees, TAV Airports CEO Sani Sener said.

Authorities have detained 24 people in connection with the attack investigation, including 15 foreign nationals, the state-run Anadolu news agency reported.