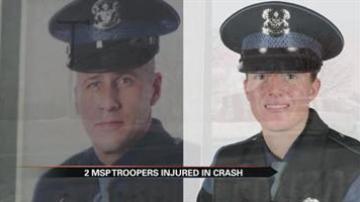 NILES, Mich. -- Two Michigan state troopers were taken to the hospital after a car accident Wednesday morning. The accident happened in Berrien County on M139 and John Beers Road. Police say another car was speeding on the highway, lost control and slammed into the back of the troopers' SUV.

Seven state troopers have been injured in car accidents since October - just in Berrien and Cass counties.

Police say distracted driving can be blamed for a lot of the incidents and that's likely the case here.

"About fifty percent of fatalities for police officers is now from traffic crashes," said Lieutenant Melinda Logan of the Michigan State Police.

Logan says it's something law enforcement shouldn't have to worry about.

Wednesday morning Troopers John Miller and Holly Tetro were rushed to the hospital after their car was rear ended while trying to make a left turn.

"Plenty of people out on the road trying to get to work and there's no excuse other than just not paying attention at that point," said Logan.

The troopers suffered minor injuries and have since been released from the hospital.

Logan says it's another example of why people need to slow down and pay more attention, especially when the roads are slick.

"Even if the roads look clear, take your time. Be late, it's O.K. It's better that you make it than not make it all," said Logan.

Police say there's no set demographic for the people causing these crashes. The drivers have been young and old, men and women, local and out of state.

They're just hoping all people heed the advice and slow down before someone is killed.