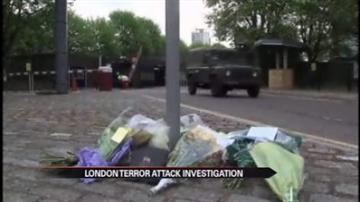 LONDON — London police are stepping up security after what officials believe was a terrorist attack.

Police also raided the home of a suspect's father in search of clues as to why his son brutally killed a soldier with a knife and a meat cleaver.

The British man converted to Islam in 2003.

Nearly 1,200 officers are guarding religious buildings in fear of retaliation.

"This was not just an attack on Britain and the British way of life. It was also a betrayal of Islam," said David Cameron, British Prime Minister.

Both men are still in custody in the hospital.

Meanwhile the woman who confronted the men has been called a hero. She says she was trying to make sure they would not hurt a child.