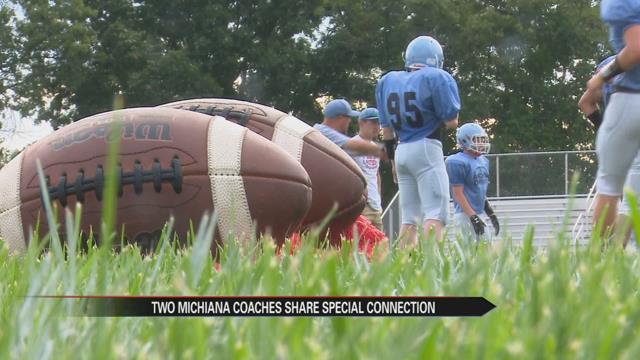 Two new hearts came together on one field. The Northridge and Lakeland high school football coaches both had heart transplants in the last two years, and they met again on the field Friday night after two successful surgeries.

Football, they said, has helped them recover.

“You kind of realize you need them as much as they need you,” said Lakeland football coach David Priestley.

“I can’t really put into words what that guy means to me,” said Morgan Moore, one of his former players.

“Coming out to football is really such a treasure for us, and we love doing it, and our football kids have been so great about it in wanting to spread the awareness for Indiana Donor Network,” said Northridge football coach Bryan Fischer.

That’s because both Priestley and Fischer had to have heart transplants recently, which was a complete shock to their families.

“It’s been like a roller coaster. It’s been up and down,” said Priestley’s wife Stacey Priestley.

“It kind of feels like the wind has been let out of your sails a little bit or someone has punched you in the stomach, especially for us, because we didn’t even know he was sick,” said Fischer’s wife, Christy Fischer.

When they found out the other one was going through the same ordeal, they leaned on each other for support.

“When he first called me and he explained where he was at, and what I was going through, it was so uplifting to me to see that you could have a life with the LVAD,” Coach Fischer said.

“It was kind of one of those things where you’re scared at first, but really with him, we kind of got through that period really quickly,” said Fischer.

Their teams have been playing each other for years, but Friday night, they met on the football field for the first time since they both had their transplants.

“To see that they’re both here, both healthy, both enjoying, both enjoying coaching and doing what they love to do, it makes me happy,” said Moore.

Moore now wants to be a football coach because of Priestley.

“I drive three hours every Friday night just to be able to coach Lakeland just because Priestley’s the one that gave that passion of football to me,” said Moore.

That’s why Priestley and Fischer started coaching, and what helped get them through the last couple years.

Now, their football games have taken on new meaning: promoting organ donation--in the hopes of saving someone else’s life.

Both coaches say as is the case with most people, they didn’t realize just how many people need transplants.

More than 1,300 people are awaiting transplants in Indiana alone according to the Indiana Donor Network. One person’s donation can help 60 other people.