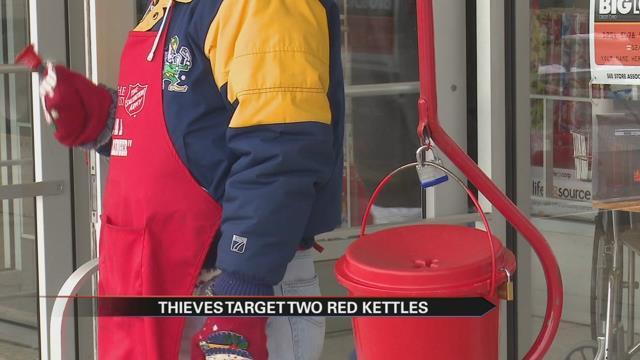 Two Salvation Army kettles were stolen in the last two days in St. Joseph County. Police are still searching for the suspect.

The Salvation Army is saying this is the first time this has ever happened in St. Joseph County.

“The worker you see behind me was here from 10 to 3, and the next person wasn’t here when the van came through to pick up,” said Senior Salvation Army Kroc Officer, Monty Wandling.

Before the van could make it back to Big Lots in Mishawaka on Tuesday,

“We found out that someone had come here to the Big Lots and actually stole the kettle and stand, picked it right up, put it in their car, and drove away,” said Wandling.

What’s worse is it was a special day for St. Joseph County’s Salvation Army.

“On my calendar, they put in the event, ‘The Day That Makes It All Worthwhile,” said Wandling.

That’s when they give out the gifts they’ve collected for nearly 1,000 families.

“When this happened, people were like I have never heard of that happening here,” he said.

But then Wednesday at around 4 p.m. at the Walmart on Portage Avenue, “that same thing happened. They went out on break, came back, and their kettle was gone,” said Wandling.

South Bend and Mishawaka police say the two thefts may be connected, but they’re not sure yet.

Both crimes happened at around the same time, and the relatively vague vehicle description from both surveillance cameras are similar—an older lightly colored vehicle.

“It’s just a bummer. If you needed help, just stop by, we’d be happy to serve you,” said Wandling.

He says that’s what they’ll continue doing with their deadline looming.

“I’m sad, but I’m hopeful that our community will just stay behind us and know that we’re here to serve,” said Wandling.

If you would like to help out you can text ‘MERRY’ to 71777 or slip cash in any one of the 20 kettles scattered around St. Joseph County.