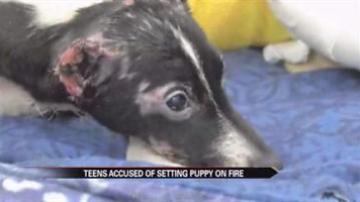 BUFFALO, N.Y. -- Wednesday, two teens are in custody accused of setting a puppy on fire.

The suspects are said to have burned a 16-week-old puppy.

The suspects were picked up by police late Tuesday night but have not been formally charged.

They are expected to have felony animal cruelty charges.

The Jack Russel Terrier puppy, who has been given the name "Phoenix" is still recovering at the small animal hospital.