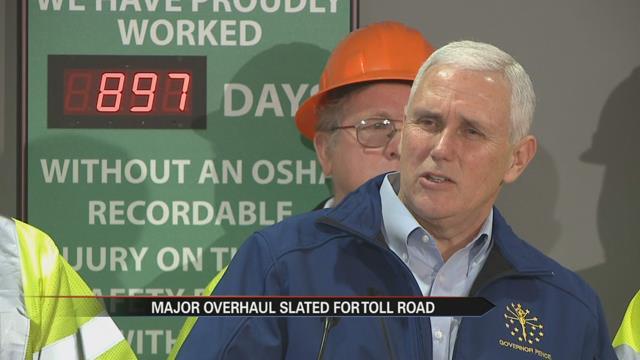 Two years and $200 million will go into improving a 70 mile stretch of the Indiana Toll Road.

Tuesday, Gov. Mike Pence along with toll road executives announced the 80-90 Push Project, on a stretch of the road that goes straight through Michiana.

“This investment over the 70 mile stretch is going to be all kinds of improvements; widening, and repaving and resurfacing,” said. Gov. Pence at a Granger Toll Road building Tuesday.

The toll road will pay completely to have its roadways fixed, bridges made more sturdy, and a fiber optic cable installed for better communication.

“We’re going to completely redo the pavement between mile markers 20 at lake station, through to mile marker 93 at Elkhart,” Ken Daley, CEO of the Indiana Toll Road Station Company said.

Spearheading these local improvements is a local company, Rieth-Riley construction of Goshen.

“Rieth-Riley has been on the toll road numerous times, so we’re very familiar with what it takes to get the job done,” Gene Yarkie, vice president of operations at Rieth-Riley said.

Yarkie says his company will be careful to inconvenience drivers as little as possible.

“We know how much traffic  typically there are at certain times of the week and on certain days of the week, and so we’ll work around that,” Yarkie said.

That doesn’t mean there won’t be delays.

“Sometimes it will have to be closed down to one lane,” Daley said.

Daley added that he believes  two years of changes for new pavement that should last 20 years, is worth it.

“We’ve looked at this section of road, and we believe this is the appropriate thing to do. Do the work correctly now,” Daley said

Rieth-Riley says the project will provide for new job opportunities for the community, but the number of new jobs available has not yet been determined.