Ultimate Frisbee catching on in Goshen 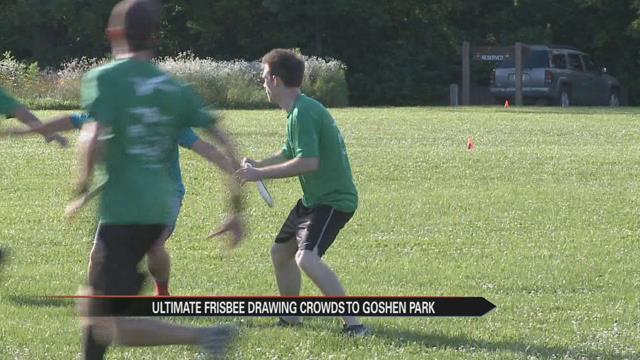 Lots of running like soccer, strategic plays like football, and fun like Frisbee is how president of the Goshen Ultimate Frisbee League explains this light hearted sport.

“It’s a beautiful day – get out and enjoy running around in the sun,” says Matt Bateman, of the Goshen Ultimate Summer League.

Love for the outdoors inspired Bateman and a group of his friends to start an Ultimate Frisbee league in 2009.

“The first year I remember watching the count go up and we were like as long as we get 20 or 30 we can have two teams,” says Craig Glick Miller, of Goshen Ultimate Summer League.

Seven years later, at Oxbow Park in Goshen, about 130 people make up the eight teams who spend their Tuesdays throwing around Frisbees.

“Everything always takes a couple years to get rolling and get moving,” says Krista Daniels, Goshen Ultimate Summer League.

Daniels, who has been with the league since day one, is finally starting to see more and more people come out to Oxbow Park.

“We have been growing a little every single year but this year is our biggest year for sure,” says Daniels.

With more women joining the league was able to expand from six teams to eight. But the guys still dominate the field making up about 75% of the team.

“We are a coed league so we need women otherwise we can’t run it- we can’t run the league at all,” says Daniels.

The 2015 regular season ends at the end of July.

You can check out what Ultimate Frisbee in Goshen is all about during a tournament on August 1st.