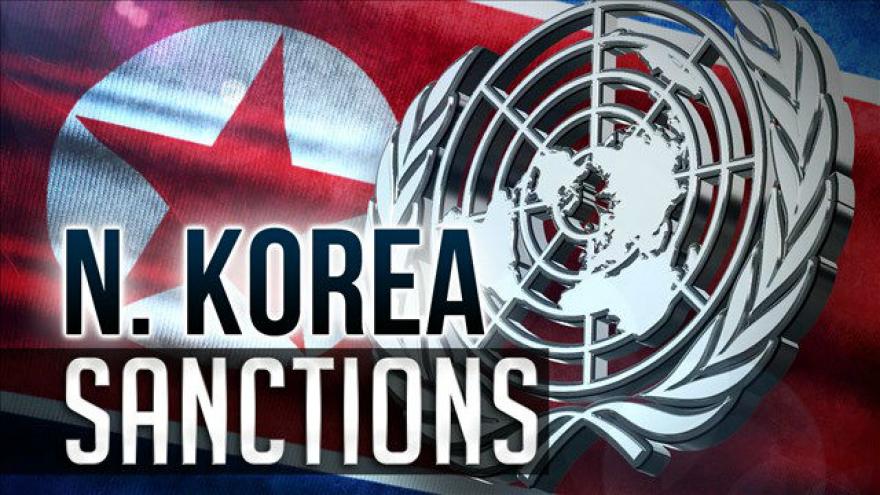 The United Nations Security Council unanimously adopted a US-drafted resolution to impose new sanctions on North Korea on Monday --- a move that comes just one week after the rogue nation carried out its sixth and largest nuclear test.

(CNN) -- The United Nations Security Council unanimously adopted a US-drafted resolution to impose new sanctions on North Korea on Monday --- a move that comes just one week after the rogue nation carried out its sixth and largest nuclear test.

"Today, we are saying the world will never accept a nuclear armed North Korea, and today the Security Council is saying that if the North Korean regime does not halt its nuclear program, we will act to stop it ourselves," US ambassador to the UN Nikki Haley said following the vote on Monday.

"We are done trying to prod the regime to do the right thing, we are now trying to stop it from having the ability to do the wrong thing," she added. "We are doing that by hitting North Korea's ability to fuel and fund its weapons program."

In Pyongyang Tuesday, North Korean officials warned increased pressure from the US could mean Washington faces "a very strong response, with unbearable consequences."

"Hostile sanctions are like a delusion tantamount to expecting foolishly that the ocean would dry up," one official told CNN, emphasizing the government has not yet released an official reaction.

"As long we have a very powerful nuclear arsenal, we can ensure the security and peace of the homeland and its people."

The US first circulated a draft resolution that called for a full ban on exports of oil to North Korea and an asset freeze on leader Kim Jong Un, the Worker's Party and the government of North Korea.

But later, the US put forward another draft that removed the full oil embargo, asset freeze, travel ban for Kim and softened the language on foreign workers and other issues.

"These are by far the strongest measures ever imposed on North Korea," Haley said. "They give us a much better chance to halt the regime's ability to fuel and finance its nuclear and missile programs, but we all know these steps only work if all nations implement them completely and aggressively."

Russia and China both have veto power as permanent members of the Security Council and had expressed skepticism over the initial sanctions proposal. But China said after Monday's vote it supported the resolution.

"China is consistently committed to the denuclearization of the Korean peninsula, to the peace and stability of the peninsula and to the solution of the issue through dialogue and consultation," said Chinese Ambassador to the UN Liu Jieyi after the vote.

"The resolution adopted by the security council today reflects this principle of three commitments and demonstrates the unanimous position of the international community of opposing DPRK's development of its nuclear and ballistic missile capabilities."

Ahead of the vote, North Korea warned the United States that it would pay a "due price" if harsh sanctions were passed by the Security Council.

The sanctions were welcomed by Japan, with Prime Minister Shinzo Abe telling local media Tuesday they impose "an unprecedented high level of pressure on North Korea."

"It is up to the international community to see that these resolutions are implemented," he warned.

In the wake of the sanctions' passage, Peru's foreign ministry said it had ordered North Korea's ambassador to leave the country within five days, joining Mexico in ejecting Pyongyang's representatives in recent weeks.

Specifically, this resolution will result in a 30% decrease in total oil imports by cutting off over 55% of refined petroleum products going to North Korea, the US official told CNN.

"Oil is the life blood of North Korea's effort to build and fund a nuclear weapon," Haley said.

It will also ban the export of all textiles, the official said, noting that in 2016, the North Korean regime earned $760 million through those sales -- making it the largest economic sector that UN Security Council had not yet touched.

Additionally, the new measures will prevent overseas workers from earning wages that finance the North Korean regime -- over $500 million each year -- in addition to cutting off foreign investments, technology transfers and other economic cooperation, according to a statement from the US mission to the UN.

These additional measures were also included to limit North Korea's ability to smuggle products like coal and iron -- particularly on the high seas.

But despite the US assessment that these are the strongest measures ever imposed on North Korea, some experts said that their impact will only be effective if paired with additional sanctions.

"These UN resolutions only work when complemented by robust US sanctions which is exactly what happened with Iran," said Anthony Ruggiero, a former deputy director of the US Treasury Department and an expert in the use of targeted financial measures for Foundation for Defense of Democracies.

The restrictions are modeled on the previous restrictions on coal, in this area the US will have to build to a UN embargo, but remains unclear if Beijing will agree to one, according to Ruggiero.

"The textile ban, inspections paragraphs, and joint ventures language are strong," he added.

French ambassador to the UN Francois Delattre stated his support for the US-drafted resolution ahead of Monday's vote.

After the vote Russia's Ambassador to the UN Vassily Nebenzia explained why his country supported the resolution: "Russia does not accept the claims of DPRK to become a nuclear state and has supported all of the security council resolutions demanding an end to the nuclear missile programs of Pyongyang in the interest of de-nuclearizing the Korean peninsula. Therefore, we supported and are supporting the sanctions contained in the resolutions aimed at compelling the DPRK to meet the demands of the Security Council."

The US and its allies have been calling for stern measures against North Korea since the September 3 nuclear test.

The test sent powerful tremors across the region, suggesting the device used was the most powerful the nation has ever tested. Pyongyang claims it tested a hydrogen bomb capable of sitting atop a ballistic missile.

Hydrogen bombs have a far larger yield than traditional weapons, meaning devices can be smaller while providing greater devastation.

Making them small enough to fit on a missile is a challenging task, and one that North Korea claims to have achieved. Experts are not so sure, but as long as Pyongyang claims to have the technology, the working assumption is that it's true.