Understanding the conflict between Israel and Palestine 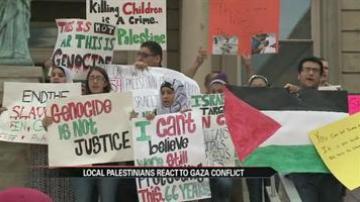 SOUTH BEND, Ind. -- Many local Palestinians are concerned about the conflict on the Gaza Strip. They say they want to see Michiana residents learn more about what is happening in the Middle East.

Palestinians want others to understand that despite what's happening with across the world, they stand for peace.

They believe if people have a better understanding of the conflict, relationships between Israel and Palestine will improve.

The United States sides with Israel in this conflict to protect people from terrorist groups like Hamas.

Palestinians believe they are misunderstood and attacked for no reason.

They believe if they have their own state, the situation would resolve itself.

“All they need is their independence and we would love for the United States to understand that formula,” said protester Salah Hilal.

But it's not that simple. Many experts believe violence has become the norm between the two territories and creating two separate states would require a lot of details to be hammered out that might never happen if this fighting never stops.

So, while a conflict that's lasted for decades between two groups with completely different beliefs likely won't end overnight, protesters believe they have a duty to speak up.

“We who live in a free country need to be the voice for those people because they have no voice," said protestor Noor Abu Sheikh, a protester.

If this is an issue you feel passionate about, the group of Palestine protesters urge you to contact Secretary of State John Kerry at (202) 647-4000.

Also, for a better understanding of this conflict, click here.


Also, for a better understanding of this conflict, click here