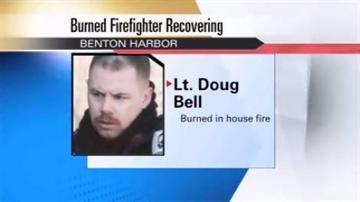 BENTON HARBOR, Mich. -- Members of the Michigan Firefighters Union spoke in Benton Harbor about their concerns with the cross training of police and firefighters. They cited the injuries to Lieutenant Doug Bell last month as evidence the plan is dangerous.

It has been almost a month since Bell was burned in a house fire.

He was the only trained firefighter to respond to the fire and got trapped inside. He was burned and remains hospitalized.

Representatives from the firefighters union say the Public Safety Department model is to blame. They say cross training police to be firefighters doesn’t work because they are not being trained well enough.

“You have a 2 in and 2 out rule, I mean you have 2 guys in the inside, 2 guys on the outside. These are just things you don't do, you don't send 1 guy on a fire rig by himself and expect him not to do anything in the middle of the night thinking that there's possibly someone in the house,” said Rob Kokko, Clinton Township firefighter who was also burned in a fire.

The firefighters say they have no bad feelings toward any of the cross trained officers in Benton Harbor, the problem that they have is with the model as a whole.