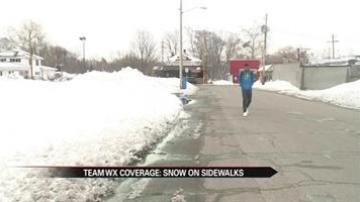 SOUTH BEND, Ind. -- The snow and ice may be melting away but not fast enough for some South Bend students being forced to walk in the street because sidewalks are full of snow.

For Adams High School Student Triston Banks, it is becoming the new normal.

Walking in the street to get home because the sidewalks in the neighborhood off of Portage Road are full of snow.

“It’s really hard to walk on the sidewalk because there’s mostly snow and then there’s ice,” Triston said.

The city said it is the responsibility of homeowners to shovel the snow from their sidewalks. But what about sidewalks in front of a vacant home?

ABC57 wanted to know so we called the South Bend’s Department of Public Works.

However, we never got called back so we reached out to the mayor’s office.

Spokeswoman Kara Kelly first referred me back to Paul South at the city’s public works department but then told me that it is not clear who is responsible for clearing those sidewalks.

Triston said sidewalks should be a priority. He says he has to dodge cars on his way to school.

“When you’re walking in the street it's kind of scary. Cause you might slip on ice and there’s a car coming this way. That’s happened to me a few times,” he said.

So what was a top priority for the city Thursday night? Saturday’s St. Patrick’s Day Parade.

Crews will be clearing streets and sidewalks of snow along the parade route.

Businesses said they are looking forward to the snow removal, not only to help keep residents safe, but to make it easier on customers.

“If you see people walking in the street you have to drive into another lane. But if they clear this out it would be a lot more business for downtown South Bend,” said Barnaby’s Night Manager Tara Dickens.

And while business is good--are people like Triston who walk city streets daily paying a price?