Up to ten inches of snow reported in Michiana 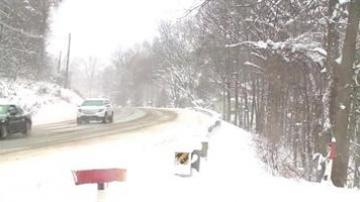 BUCHANAN, Mich. -- ABC57 drove through several areas of Michiana to see how much snow fell. In Buchanan, Michigan, the snow measured up to ten inches deep. Six inches fell in New Carlisle, Indiana and at the ABC57 studios, we received 9 inches of snow in South Bend.

Brian Taulbee of New Carlisle was clearing his neighborhood driveways to get cars out.

"It's a little extreme but it's been a weird year," said Taulbee.

Out in Buchanan, Michigan, cars were completely surrounded by snow measuring 10 inches deep.

"It's a nightmare," said Glen Bianchi of Buchanan.

That's how Bianchi describes the driving conditions on Wednesday.

"It's white. You can't barely see anything," said Bianchi.

With roads covered in snow, cars got stuck in ditches. Drivers were in the streets trying to push their cars free.

"It's a white out, it was coming down so hard you could barely see.  So the snow is melty, wet, heavy, slick, slidey [SIC], trying to stop, I have been doing that all day. Buchanan is definitely a mess," said Pual Bennett of Buchanan.

Although messy, Bennett, a Buchanan native, says this weather is nothing new.