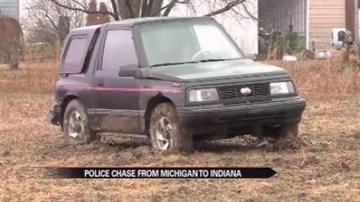 The Elkhart County Sheriff’s Department arrested a man who led police on a chase from Edwardsburg, Michigan to Goshen, Indiana Tuesday afternoon.

It appears the driver lost control of the vehicle after leaving the road.

The car ended up getting stuck a short distance from the road and the driver was taken into custody.

The driver was identified as 46-year-old Mark Leahy, according to the Elkhart County Sheriff's Office.

He was taken to the Elkhart County Correctional facility on charges of resisting law enforcement and operating while intoxicated.